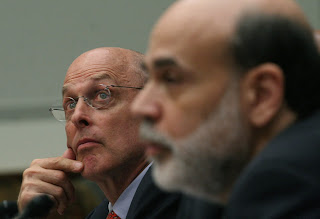 With all due respect to Messrs Bush, Paulson, and...well, Bernanke too, I suppose, this economic stimulus seems more like a styptic pencil. You know, those things used to temporarily stop bleeding from shaving cuts and the like? If BPB really wanted to stop the bleeding, US leaders would accelerate investments into creating a new, clean economy.

The current stimulus package does not extend the renewable energy incentives, which expire at the end of this year. And that is too bad. Letting these incentives expire will potentially eliminate thousands of jobs and derail billions of dollars in future investments, according to sources close to the situation. All this when we're experiencing record private investment in alternative energy.

"2007 was a record year for renewable energy in the U.S. Almost 6,000 megawatts of new renewable energy came on line in 2007, infusing over $20 billion of investment into our economy," Rhone Resch, president of SEIA, told a packed house at the National Press Club the other day. "And along with this investment came jobs. In 2007, the renewable energy industries put Americans back to work, creating tens of thousands of high quality jobs in all 50 states. Jobs like electricians and plumbers, line workers, roofers, engineers, and high-paying manufacturing jobs. These jobs are the backbone of our economy in the U.S.

"But already these jobs and many more are at risk. The 2007 energy bill was passed in December with much fanfare, but without an extension of the renewable energy tax credits. Already we are seeing sales and new project announcements drop off. Large scale solar and wind projects take longer than a year to site, permit and construct. And with only 11 months to go before the credits expire, these projects have started drying up. Even larger concentrating solar, geothermal and hydro projects take many years to construct and will not get built without a long-term extension of the tax credits. If the renewable energy tax credits are allowed to expire, we will lose hundreds of thousands of jobs here in the US."

"As leaders of four major renewable energy trade associations, we respectfully urge bipartisan Congressional Leadership and the President to work together to include renewable energy tax provisions in any economic stimulus legislation currently being developed," said Resch. "Renewable energy will put Americans back to work, provide reliable and domestic energy for homes and businesses, and spur billions of dollars of economic investment but only if Congress and the Administration take immediate action to extend the renewable energy tax credits."

I agree with Mr. Resch and his colleagues: If you're serious about stimulating the economy, Messrs BPB, perhaps it's time to seriously invest in a new, clean economy.

Your blog doesn't appear to accept trackbacks so here's a link to my site where I just quoted you:
http://vitalsocialissuesnstuff.com/2008/02/05/bribing-us-into-submission/

Thanks for the trackback, Mikester. I don't agree with the sentiment, but appreciate the link.

I don't think the current economic stimulus package will, in fact, stimulate the economy. What I am arguing for is some serious investment in a new green economy not a temporary give back.