Break Through: From Ashes of Environmentalism Comes Hope and Imagination? 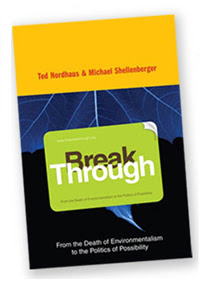 Environmentalists have it all wrong.

We don't need no stinking limits, what we need is economic growth fueled by a massive investment in alternative energy that positively transforms the living standards of people around the world.

We need energy independence and ecological security. We need an agenda that puts investment, jobs, and economic growth front and center.

The spirit of possibility is at hand, we need only take it up -- and secure a front-loaded investment in R&D from the Department of Defense to get this thing moving.

Okay, I'll get off my soap box. Readers of The Green Skeptic are familiar enough with my thoughts on the matter.

Much of this kind of thinking runs through the pages of Ted Nordhaus and Michael Shellenberger's new book Break Through: From the Death of Environmentalism to the Politics of Possibility, which I've just finished.

You remember them? They got many pairs of green knickers in a twist with their essay calling for abandoning the environmental movement (and a few cheers from some of the more skeptical among us).

They've written an important book. Flawed, but important. And a little bipolar.

One the one hand, it's a much-needed critique of the way the environmental movement thinks and speaks of its issues. This follows logically on their original essay. And it is sort of in the vein of William Easterly and John Perkins' confessionals/attacks on their former selves.

I mean, these guys were strategists for some of the doom and gloomers; now they've seen the light and the error of their ways.

In terms of making change, their basic argument is that people rate the environment and global warming low on their list of concerns, relative to other concerns like economic security, terrorism, etc. And the enviros haven't been listening; they want to convince.

For example, Americans are more concerned by rising energy prices than the prospects of global warming. Yet the prevailing environmental messaging strategy calls for raising energy prices even higher through taxes and such. Certainly a disconnect there. Ya think?

But when it comes to providing hope beyond some flowery rhetoric, Nordhaus and Shellenberger offer very little new thinking.

A little pimping for their Apollo-style energy proposal, which was introduced into Congress by Representative Jay Inslee of Washington, and the authors are off on quite a few tangents about NIMBYism and facing the fact that we are now like Gods and we'd better get used to it.

The second half of the book could have used some heavy editing and shaping by the gang at Houghton-Mifflin. You can get by with a snarky attitude if you really have something to say, believe me. In the end, however, you have to bring your whole game.

I wanted a little more pragmatism in the chapter of that name. And what was the point of that attack on Francis Fukuyama in the final chapter? At times, such as in the clever analysis of how Tony Blair lost the war on global warming on the world stage, it seemed like a clever magazine article run amok.

The authors fall short in facing some of the realities of climate change. It is happening, will affect millions of people directly, and we will have to find a way to adapt and mitigate the severity, while making investments in technologies that will help us get there. (I felt they sold short the adaptation piece in particular, in the rush to push their investment agenda.)

That said, the authors rightly point out that to succeed in turning this around, we need remember what we're great at: "imagining, experimenting, and inventing the future."

We can imagine a better future if we set our minds to it. So what are we waiting for?
Posted by The Green Skeptic at 12:21 PM

Thanks for the review; it's on the list of books to read. I think the premise is accurate in that people want to invest their time/efforts to build something rather than changing behavior and going without. The glass should be half full, rather than half empty.