My Three Take-Aways from BNEF Summit 2013

BNEF puts on a good show. Their analysts have a deep understanding of their particular focus area and they know how to present data, and the other panelists and presenters are always top-shelf.

Having been a part of the Summit two years in a row now, I see the value in getting such a group together for an annual sit-down to have a look under the cleantech/new energy hood.

As one attendee, @electricityyoda, Tweeted during the event, "Yoda once said 'Always pass on what you have learned.'" Taking his advice, here are my three take-aways:

Whether you like it or not, natural gas, specifically in the US, but increasingly elsewhere, is now part of the conversation.

Frack-water aside, gas has had a huge impact.  For some, gas is a bridge to cleaner technologies; for others it's a pier, and for still others, gas appears to be a destination.

It remains to be seen whether the impact on renewables will be net-negative or net-positive. If gas "hooks up" with solar, as NRG's David Crane suggested, it could dominate the future electricity supply in the US.

(On the subject of fracking, I think there are still plenty of opportunities and needs for technologies to address the fracking chemicals, clean up the water, and to capture the CO2 emissions generated from the process.)

Seventy-nine percent of BNEF Summit participants answering an onsite poll said policy and regulation were the largest uncertainties for energy investment. (See photo.) And this doesn't show any signs of changing any time soon. Especially in the US, where very few expect major energy legislation.

Small wins will have to do for now, such as the legislation introduced by Senators Lisa Murkowski (R-Alaska) and Chris Coons (D-Delaware), that would extend the master limited partnership program to clean energy companies.

The program, which Murkowski indicated has bipartisan support in both the Senate and the House, allows companies to raise funds like acorporation and pay taxes as a partnership. Currently, the program provides favorable tax status only for oil and gas projects and other fossil fuel companies.

3.) Costs continue to come down, making renewables more affordable...but is the grid ready for it?

As BNEF reported, "the cost of installing a gigawatt of renewable energy capacity is now about 10 percent lower during the period through 2030 than it projected in 2011," but is the grid ready for it? We have an aging infrastructure and our delivery system is out of whack.

As NRG's Crane quipped, "the 21st Century economy should not be based on wooden [utility] poles."

For more on the BNEF Summit, and to see some of the speeches from the event, check out the Summit videos here.


(Disclosure: my employer, Ernst & Young LLP is a sponsor of the BNEF Summit, through our Global Cleantech Center. Opinions mine.)

Posted by greenskeptic at 3:59 PM

"We focus on teamwork," Cheryl Martin, Deputy Director of ARPA-E (Advanced Research Projects Agency-Energy) in her keynote address to the Mid-Atlantic Energy Technology Forum last night. "There has to be a strong team and if we need to bring in a CEO to take the company to market, we will."

Dr. Martin, in her second year with the research and commercialization agency, spoke to a crowd of around 200 energy enthusiasts, investors, and entrepreneurs at Philadelphia's Academy of Natural Sciences of Drexel University.

"We look for high-potential, high-impact energy technologies that are solving real problems, and the dedicated teams that can bring them to market," Martin noted. "We just celebrated our fourth anniversary. We've got more to do."

Marking its own 5th year, the Mid-Atlantic Energy Tech Forum (formerly Cleantech Investment Forum) is a partnership between the law firm of Blank Rome and the Cleantech Alliance Mid-Atlantic, which I co-founded in 2008 with Kevin Brown of the search firm Hobbes & Towne.

The Forum has grown into the premier showcase for the region's most promising companies in energy technology, cleantech, and resource efficiency.

Last night's presenting companies ranged from software as a service offerings such as Propel IT, which uses data and incentives to reduce fuel consumption in trucking fleets, to Rentricity's plug-in microturbine that captures energy generated by pressure reducing valves in the nation's water distribution system.

The CEO presenters included serial entrepreneurs and a former banker who each explained their solutions in 7-minutes pitches. All highlighted their management teams as well as their revenue structures and some spoke of the importance of customers.

The focus on customers was raised earlier in the evening by the investor panel, which I moderated.

As for opportunities in the sector, panelists Andrew Garman of New Venture Partners and Purnesh Seegopaul of Pangaea Ventures, each suggested the funding ecosystem for research and development has expanded and that sustainable solutions are needed in everything from buildings to fossil fuel use require advanced materials.

There has also been a boon in corporate venture capital, which has helped fill the investor syndicate pool as other VCs have left the water.

Success breeds success, however, as in most investing.

"We look for patterns of successful companies and want to replicate those patterns in other disruptive industries," said Seegopaul.

As one attendee told me during the cocktail reception after the program, his key takeaway was that business model innovations that can scale, focus on the customer, and disrupt their industry will win in the current market -- as long as they have a strong team and financial rigor.

Good lessons for any business, but especially in the current cleantech and energy environment.


(DISCLOSURE: The author is co-founder of the Cleantech Alliance Mid-Atlantic, one of the hosts of the event describe herein.)

Posted by greenskeptic at 10:31 AM

What's Going On: My Remarks from Cleantech Open Northeast

Cleantech startups, like any new venture, need a leg up. That's where accelerators like Cleantech Open come in.

If you don’t know Cleantech Open, it’s an accelerator that has been helping cleantech startups and entrepreneurs launch, improve, and fund their businesses since 2006.

Last night, I delivered the keynote to kick off Cleantech Open NE in Philadelphia.  My remarks centered around three areas: ten trends and drivers, four reminders, and five things I’d like to see in the cleantech sector or hopeful signs.

First, the 10 trends and drivers:

Next, 4 things we need to remember:

And finally, 5 things the sector needs now or hopeful signs:


Those were my thoughts shared with the audience last night in Philadelphia. Let me know what you think.

Posted by greenskeptic at 8:27 AM 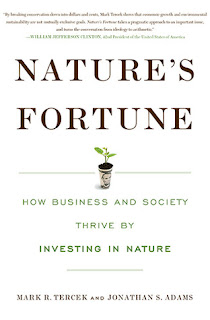