If I Could Speak at Davos: My Top 5 Reasons Cleantech Is Alive and Well

My colleague who posts as @EY_Cleantech had an interesting tweet this morning. She posited the question, If you could speak at the World Economic Forum on cleantech, what would you say? 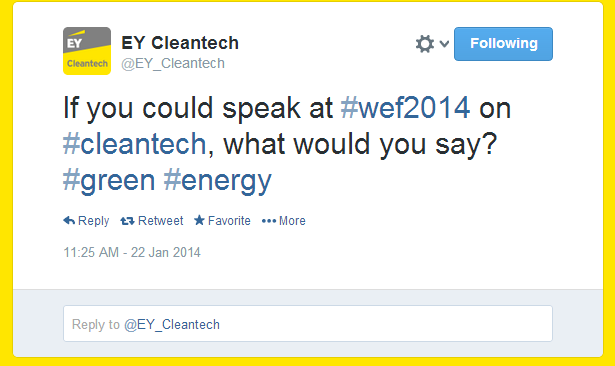 Here is my answer.

Cleantech isn't dead. It hasn't crashed, hasn't lost its value, and has only grown more important and necessary.

Here's My Top 5 Reasons Cleantech Is Alive and Well:

1.) China. China is finally acknowledging and stepping up to the plate to address its outrageous pollution problem. China's air and water quality is breaking its ability to make progress. The Beijing Municipal Bureau of Environmental Protection estimates it will cost China upwards of $800 billion to clean its air. $800 billion. Beijing alone could cost as much as $163b. And its water doesn't fair much better: seventy percent of the groundwater in the north China plain is unfit for human contact -- not consumption, contact. And only half the water sources for Chinese cities are safe to drink. The Chinese government says it will commit 1.7 trillion yuan ($277 billion) to combat air pollution over the next five years, which is a start, but until then we'll keep seeing scenes like the LED sunrise on Tiananmen Square in Beijing.


2.) Google bought Nest for $3.2 billion. This is a cleantech success story. I don't care whether Nest Labs ever considered itself a cleantech company since its founding in 2011. If cleantech is the set of new technologies and business model innovations that help use natural resources more efficiently, effectively, and responsibly, then Nest, which took a ubiquitous, yet poorly designed technology (the thermostat), made it smart and fun to save energy in homes because its cool and easy to use. That is cleantech.


3.) Solar, distributed solar. I know, solar was a dirty word for some investors, including the American tax payer, who got burned by solar 1.0. But there's a new game in town now that solar panels are cheap and financing distributed solar has become easier thanks to innovators like SolarCity, Sungevity, and the like. Installations are on the rise and investment is pouring back in.

4.) Tesla Model S. Motor Trend Car of the Year. 2014 Detroit News Readers' Choice Award as North American International Auto Show Most Innovative Vehicle. Yes, D-E-T-R-O-I-T News. Tesla recently announced it had sold 6,900 of its Model S in the fourth quarter -- twenty-five percent higher than the previous quarter and roughly twenty percent more than expected. And with work begun on the Model S sedan, which will sell for about half the $69,000 price tag of its big brother, Tesla is in line for growth and more growth. That's for a company with $21b market cap.


5.) Many more innovations are needed. Energy efficiency, recycling, water use, as well as purity and scarcity, and food are all ripe for cleantech disruptions, innovations, and solutions. There are still plenty of opportunities out there for entrepreneurs, investors, and others to tackle resource scarcity, use, and management. We've only just begun to address the issues our planet faces. And the need for innovative financing to enable these solutions is also going to grow. Call it what you will, "cleantech" is going to be a growth engine for many years to come.

That's what I would say if I could speak about cleantech at Davos.

Posted by greenskeptic at 5:18 PM 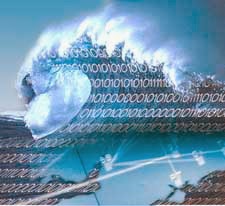 "Big data is a coming wave of 'green gold,'" says Nick Eisenberger of Pure Energy Partners."Information technology will be the most powerful tool to address resource challenges in our lifetime."

Eisenberger was speaking at the Markle Foundation offices in New York, where Agrion, which bills itself as the global network for energy, cleantech and corporate sustainability, convened an impressive roundtable to talk about advances in funding new ideas and uncovering innovation for energy and sustainability.

"Energy is where the most data is," said Clean.Data.Project's Jon Roberts. And the panelists agreed its where the most opportunities are in energy, improving its generation, use, and efficiency. Yet not all the necessary datasets are open.

"The biggest obstacle is generational," Eisenberger claimed. "The older generation, my generation, is not comfortable with the 'open' in open innovation."

Richard Robertson explained how GE Ventures has invested in Quirky, a crowdsourcing platform for inventors, and has turned to the crowd for help with design and product naming.

The innovation is out there, Robertson suggested.

"Sungevity has an incubator in their Oakland facility, and Solar Mosaic [the crowfunding platform] is in that incubator,” said Robertson. “Mosaic is looking at not just solar projects, but wind, energy storage. They're putting projects in the ground."

At least one audience-participant in the Agrion session, a project finance expert, called into question some of the deals Mosaic and others are funding and the stated returns listed on the Mosaic site. "We wouldn't fund those projects," he offered. "It's like charity."

But that's precisely the point made by Mosaic and others, such as alternative financing renewable energy companies SolarCity, SunRun, and United Wind, among others. They are there to fund the deals no one else will, deals that aren't big enough for the big banks, which is a pretty good sized niche.

That is, in fact, why these new models exist.

For those not familiar with the Mosaic model: projects are listed on its online marketplace, which allows investors pick projects to fund and then provide the capital for rooftop solar installations. The investors are repaid once the project is up and running and generating electricity. Their first projects were mostly on affordable housing in California.

The company provides capital to developers at about 5.5 percent and collects a 1 percent fee, according to some sources, returning roughly 4.5 percent.

“To rapidly deploy clean energy, the industry needs access to low cost capital and lots of it,” Mosaic co-founder, Billy Parrish, told Bloomberg News last year. “We are able to source capital from the crowd and lend that capital to clean-energy developers at lower interest rates than they would get from banks.”

Platforms like Mosaic, which seek a large, “democratic” community of engaged funders, as opposed to the elite accredited few, got a boost last year when the SEC released its proposed guidelines about crowdfunding as it relates to the Jumpstart Our Business Startups or JOBS Act.

If the admittedly hand-picked crowd at the Agrion session is any indication, crowdfunding is here to stay.

However, as several roundtable participants suggested, it may be best deployed as part of a mix of financing options.