Clean Tech: Small-scale Wind Power May Be Closer to Home 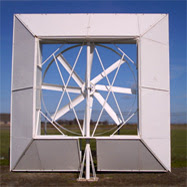 Venture Beat reported this morning about Marquiss Wind Power, which is trying to popularize a roof-top turbine suitable for use by ordinary businesses. This is good news for wind fans (no pun intended; well, maybe...) who want to see wind power brought closer to home:

"The company’s 'ducted' wind turbine looks a bit like a 19 foot tall box fan. Despite its clunky appearance, it’s capable of re-orienting itself according to the direction of air flow, while the ducting is intended to increase wind speed as it approaches the blades.

"At the moment, two models are sold — one intended for areas with wind speeds of 6-10 mph, and another for higher average speeds. The turbines are intended for buildings between one and three stories tall.

"Marquiss received the $1.3 million funding from Velocity Venture Capital, which led, and Strategis Early Ventures. The funding was the Folsom, Calif. company’s first."
Posted by The Green Skeptic at 5:30 PM