Did Santa give Global Warming Skeptic George Bush a lump of coal this Christmas, as he said he would in an email to me last week? Or did Bush have a Scrooge moment over the holiday break? Whatever the reason, there is encouraging news up north today as the Bush administration seeks to propose listing the polar bear as threatened under the Endangered Species Act. Doing so will put the U.S. government on record as saying that global warming may push the charismatic bears out of existence.

Identifying polar bears as threatened with extinction could have an enormous political and practical impact. As the world's largest bear and as an object of children's affection as well as Christmastime Coca-Cola commercials, the polar bear occupies an important place in the American psyche. Because scientists have concluded that carbon dioxide from power-plant and vehicle emissions is helping drive climate change worldwide, putting polar bears on the endangered species list raises the legal question of whether the government would be required to compel U.S. industries to curb their carbon dioxide output.

This is Santa, writing from the North Pole. Soon I'll be gathering all the toys for all the good little girls and boys and packing them in my sleigh to begin our journey, our night of nights.

The reindeer, however, are starting to complain about hoof-rot. Apparently, they've been standing around in too much slush. This has put me in a decidedly prickly mood this Christmas.

You know me; I'm not a single-issue guy. I believe that as long as you are good, and I mean good for goodness' sake, you deserve some slack on the other stuff. I'm an equal opportunity distributor. I know whether you've been bad or good or just plain evil. You also know I'm not one to discriminate against one group of people or another, believers or non-believers.

But this year is different. This year, I'm making a few changes to my list. I'm checking it twice and have decided that the naughty include any one of you out there who do not believe in global warming. All you climate change skeptics out there, you are on the naughty list this year.

Oh, you know who you are. And I've got one special gift for you: Nothing but COAL. You like the stuff so much -- and it's such a big part what's leading to climate change -- you might as well have bags and bags of it and nothing more.

Make no mistake. Global warming is happening. You don't have to show me any scientific reports, although some nifty ones have shown up in my email box lately, sent to me from the National Center for Atmospheric Research and the National Snow and Ice Data Center.

No, you don't have to convince me; I'm a believer. All I have to do is look out my window to my back yard, what's left of it! It's a soupy mess out there.

We usually have a good bit of ice up here at the North Pole -- and early. That's important, too; you see, every year the elves and I construct a temporary workshop up here where we make the toys and assemble the other goodies. The earlier the ice, the sooner we get started. Although I have figured out a way to deliver the entire shipment of gifts on my list in one night, I still haven't perfected the manufacturing process. I can't speed it up. (Some of that I blame on the unions.) We need all the ice we can get up here for there is no solid ground.

But this year, the ice cover was the lowest it's been in almost 30 years. And at least one of those science groups studying this stuff tells me that, according to their models, by 2040, we'll have mostly open water up here. (They sent me this short animation clip, which sends chills up my spine: Arctic Ice Melt.)

Mrs. Claus has even started looking for Houseboats on Craig's List!

So, dear boys and girls, you better not pout or cry or whine or deny climate change any longer. And I'm telling you why: because climate change is coming to town. Time's a wasting. We need to do something about this now, before it's too late. Or before I have to move all of my operations to the South Pole!

Here's wishing a carbon-neutral Christmas to all, and to all a good night.

Peter Bohan, writing for Reuters/Planet Ark, reports this morning on the conference of Midwest (U.S.) investors who gathered at the University of Chicago Business School a week ago.

The conference was organized by the Investor Network on Climate Risk (INCR), a program of Ceres, the "national network of investors, environmental organizations and other public interest groups working with companies and investors to address sustainability challenges such as global climate change." It follows on the heals of a disclosure reporting framework advocated by Institutional Investors earlier this fall.

Bohan notes that the talk was sobering, writing that the consensus "was that institutional investors are still too near-sighted to factor climate change into their investment decisions." William Page, a portfolio manager at State Street Global Advisors, told Bohan, "The value proposition is one the Street isn't really recognizing."

He also quotes Michael Moran, vice president of global investment research at Goldman, Sachs & Co., who said that Wall Street "was still taking its first steps. 'The first step to recovery is acknowledging you have a problem.'"

At issue is capital that is centered around short-term strategies, such as hedge funds and mutual funds. As Moran told Bohan, "They say: 'I understand climate change. I think it's a big risk. But you are talking about long-term issues. I get evaluated every three months. I get a percentage on this year's profits.'" Individual investors may have a longer view, it was noted.

Bohan reports that Richard Sandor, head of the Chicago Climate Exchange, and others encouraged "every institutional investor to push companies to evaluate and estimate their climate risk."

The risks from liability may be particularly onerous. Such risks are being scrutinized by the insurance industry in a major way, because of the potential impacts on that industry.

Bohan suggests that damage from last year's Hurricane Katrina -- an event that can not be directly linked to climate change -- at "about US$125 billion...with US$45 billion covered by private insurers."

Conference participants, according to Bohan, "agreed to keep pushing companies to disclose their climate risk and to press the Securities and Exchange Commission to encourage such disclosure."

While it's easy to focus on the risks, investors may want to look more closely at potential solutions to the climate change crisis. Green technologies or "Clean Tech" industries may provide investment opportunities. A recent analysis in The Economist suggested that sector is growing, reporting that analysts "confidently predict the clean-energy business will grow by 20-30 percent a year for a decade." But, they also warn the sector is not without pitfalls for investors.

Still, for many industries, looking beyond the risks to taking proactive steps to adapt and stay ahead of regulation may be a windfall.

Writing in the Chicago Sun-Times last week, Tim Wagner, director of the Nebraska Department of Insurance and co-chair of the Climate Change Executive Task Force of the National Association of Insurance Commissioners, and Ceres president Mindy Lubber, stated that "carmakers and power providers that look around the curve and begin implementing strategies to reduce emissions and operate with greater energy efficiency will have a significant competitive edge over those that do not."

Other companies that promote "alternative energies such as bio-based fuels will reap the financial benefits of their foresight," Wagner and Lubber write, "and, in fact, already are doing so."

Yunus, 66, shared the award with his Grameen Bank for helping people rise above poverty by giving them microcredit -- small, usually unsecured loans.

"I firmly believe that we can create a poverty free world if we collectively believe in it," Yunus said after accepting the prize at City Hall in Oslo, Norway. "The only place you would be able to see poverty is in a poverty museum."

The Nobel Prizes, announced in October, are always presented in Oslo and Stockholm, Sweden, on December 10 to mark the anniversary of the 1896 death of their creator, Alfred Nobel, a Swedish industrialist who invented dynamite and stipulated the dual ceremonies in his will.

The winners for literature, medicine, physics and economics will receive their awards later Sunday at a royal ceremony in Stockholm's blue-hued concert hall. Each award carries a purse of $1.4 million, a diploma and a gold medal. The first prizes were handed out in 1901.

According to an AP story by Sue Leeman, this morning, Bonnie Prince Charles is "putting his money where his environmentalist mouth is," and swapping his gas-guzzling private jets and helicopters for commercial flights, train journeys and biodiesel cars."

A longtime champion of green causes, the heir to the throne says action is needed now to avoid leaving a ruined planet to the next generation.

"From February, we are going to look at the diary and see what we can do to reduce our carbon footprint," a spokeswoman for the prince's London residence, Clarence House, said Thursday on condition of anonymity in line with royal rules. "Wherever possible, we will be making less use of helicopters and chartered planes and rely more on car journeys, scheduled flights and trains."

When my 10 1/2 year old son saw this news in this morning's paper, he asked, "Well, what about his sons -- what are they doing?" This coming from a boy who developed a "climate monitoring kit" as a science project in 4th grade and who "adopts" polar bears from WWF Canada. Well, does anybody know the answer?

Received this note from the Ashoka/Changemakers Team. Please pass it on!

Participating now offers you the opportunity to gain access to investors, a community of innovators, and wealth of new ideas.

Twelve finalists will attend the "2007 Skoll World Forum on Social Entrepreneurship in Oxford, England in March 2007. Three winners will receive each $5,000.

Enter the competition before January 10, 2007 at www.changemakers.net or click the invitation below. (Note: well, you can't, because it's just an image...but go to the site.)

Please also extend this invitation to your friends and colleagues working in this sector.

We look forward to hearing from you, 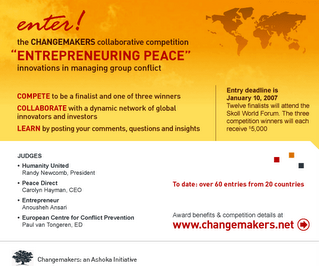