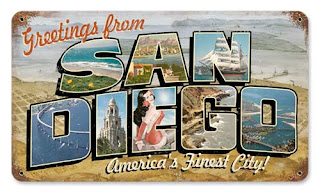 San Diego has a lot going for it: beautiful weather all year round, a great coast, and...well, the new StockTwits HQ on Coronado.

And now, after several years of investment, hard work, and a smart Republican mayor, Jerry Sanders, who saw and seized the opportunity, San Diego has an emerging cleantech community.

"We're here to serve as a catalyst," says Holly Lepre, vice president of CleanTech San Diego, a non-profit formed a few years ago to promote San Diego as a world leader in the cleantech economy. "We're trying to stimulate the demand that drives and attracts new companies."

When I visited in May, CleanTech San Diego was about to announce that the region has reached 700 cleantech companies.  Earlier in the year the organization ranked number seven in the Cleantech Network's global "Top 10 Cleantech Cluster Organizations for 2010."

San Diego is also fast becoming a hub for next generation biofuels.

In June, the California Department of Labor granted $4 million to the region to develop a job training initiative for the emerging biofuels industry in both San Diego and the Imperial Valley

And earlier this month, the San Diego Center for Algae Biotechnology, received a large part of a three-year, $9 million federal Department of Energy grant, and a consortium of seven companies, including San Diego-based Sapphire Energy, General Atomics, and Sempra Energy, are providing an additional $3 million to finance research and development.

Sapphire is developing what it calls "green crude," a 91-octane gasoline made from CO2, sunlight, and photosynthetic microorganisms. Last year, Sapphire attracted BP's former head of global refining, Cynthia Warner, to be its president. Warner saw the writing on the wall and decided "it was a lot better to create the key to the future than to nurse along the dying past."

But it's not just biofuels in sunny southern California. There are, according to Cleantech San Diego's Lepre, 176 solar companies in the region, including Spanish turnkey solar manufacturer Siliken, which has its US headquarters here, and Envision Solar, whose "solar trees" are starting to sprout up in around the country.

Envision is based in the Kearny Mesa district and housed in EcoHub, the area's first cleantech incubator. Yves Perez, founder of the Eco Investment Club, formed a partnership with Mark Mandell of property management company Square One Development, to start the incubator in a 12,000-square foot office plaza.

"We're in a secret race for the cleantech capital of the world," says Perez. "Win this secret race and we could double the number of San Diego-based cleantech companies and startups, and 700 becomes 1400 or more."

Bob Noble, president of Envision Solar explained why his company became one of the first in the EcoHub, "We wanted to be in a space where the building owners not only understood our mission but wanted to be part of it. Being surrounded by like minded-professionals opens up new avenues for collaboration and partnership."

That collaborative spirit is a key to San Diego's success, according to Lepre. "San Diego is a natural setting for a clean tech 'collaboratory.'"

Posted by greenskeptic at 11:06 AM