Review: Strategies for the Green Economy by Joel Makower 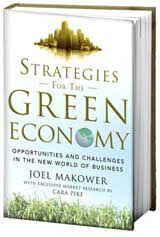 Two decades ago he wrote The Green Consumer (which we published when I worked at Viking Penguin), and over the past 20 years he's become one of the leading advisers and sustainability strategists to Fortune 500 companies.

He knows how to navigate green waters and has ridden enough green waves to show you how to do it too.

Best of all, he doesn't take himself too seriously -- and he doesn't think consumers will ever completely make the change. In other words, you can believe what he says.

Countless pretenders would have you believe that people will change their way of living and buy their way to a better future or greener pastures. Makower, in his new book, Strategies for the Green Economy: Opportunities and Challenges in the New World of Business, says it's probably not possible, given how much consumer habits -- and people in general -- would have to change.

And after more than two decades, Makower seems to think that the more things change the more things stay the same. All the green marketing efforts -- and even the greening of many products and services -- has failed to move the needle when it comes to taking action.

And it turns out, we're all to blame.

"The result of all this--motivated but distrustful consumers, proactive but humble companies, aggressive but often misguided activists, the media's mixed messages, and the lack of norms and standards of what is 'good enough' -- is that it is almost impossible to create a workable green strategy that meets the expectations of a confused and cynical marketplace," Makower writes. "Did I mention that this is a dysfunctional conversation?"

Makower has the research to back up his claims, although the lack of any notes in the book makes it difficult to verify some of the source materials. He has reviewed and studied most of the major consumer-related research on green awareness and attitudes, and he shares with his readers how to interpret such data for their own use.

Part of the problem, according to Makower, stems from the relative complexity of the issues, whether it's climate change, environmental degradation or what it means to be a "good enough" green company. It turns out; it really isn't easy being green, after all.

"What many people don't seem to know (or have forgotten) is that the 'three R's' [reduce, reuse, recycle] represent more than just a clever alliteration; they are a hierarchy of priorities," Makower writes.

He identifies a corresponding hierarchy when it comes to climate change: Reduce your overall consumption of energy; purchase as much as possible from Renewable sources; and Remedy the climate impacts of nonrenewable energy consumed by purchasing carbon offsets.

The staccato style of the book's chapters, which read a bit like a series of loosely connected blog posts (maybe they were?), can be a little disconcerting. Makower covers a lot of ground in such a relatively short book.

Makower concludes that the "virus called the green economy has not hit critical mass." More companies are paying attention and developing programmatic strategies (look at Wal-Mart, GE, and others). "But a high level of interest does not a tipping point make."

Still, in the end, Makower believes there are enormous opportunities for success -- for consumers, companies, and for ordinary citizens. And green will be an enduring issue for businesses and shareholders for years to come.

Strategies for the Green Economy begins to provide a roadmap for companies to create lasting value by going green.


(Disclosure: I formerly wrote for GreenBiz.com, one of Joel Makower's publications.)

Posted by greenskeptic at 10:58 PM