On Obama's Economic Stimulus Plan and Its Discontents 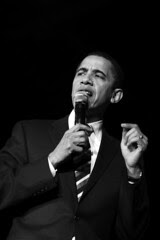 Image by christhedunn via FlickrPrez-elect Obama has wasted no time pulling together a fascinating group of people to be a part of his team, from both sides of the aisle and from a myriad of perspectives.

What's impressive about the guy is his love for SmartJocks: brilliant people who played sports. (Almost always a winning combination in my book.)

Equally impressive is how he's been able to jump right into the mix on the economy and bring this diverse group together to hash out a plan to get the country back on track. Or so one hopes.

The danger lies in what David Brooks rightly identified in this morning's New York Times as "Obama's audacious self-confidence."

But audacious self-confidence can easily slide into hubris, and I think Mr. Obama may be in for a reality check. (Remember when the Clintons got to the White House only to discover it wasn't Little Rock.)

Members of his party are questioning such a large tax cut in the stimulus package. And Republicans are concerned about some of the larger spending components, such as $200 billion to states targeted at expanding the federal share of Medicaid. In other words, business as usual in Washington.

Given all this, it will be interesting to see how the dialogue unfolds over the next couple of months. Will tax cuts and increased government spending turn out to be a winning combination? It hasn't thus far, but who knows; Mr. Obama may yet have the Midas touch.

More troubling is that the stimulus package also appears to be more of the same: bailouts, building, and a whole lotta hope. Of course there is a modicum of new initiatives thrown in, such as broadband projects, a new power grid, and new scientific research, as well as an intriguing business tax package.

The former is wildly ambitious, given how difficult it is to get energy-related projects off the ground and the latter doesn't seem to be exploiting the opportunity efficiency affords. In other words, it may not be ambitious enough.

And while many roads and bridges are in need of repair, it strikes me that this is Mr. Obama's way of pandering to state governments in order to secure their votes for the plan.

Don't get me wrong, much of this work needs to be done, and those projects certainly keep some people in work for extended periods. (I live in Pennsylvania, birthplace of the endless DOT project.)

I tend to agree with my blogging and StockTwits pal Gregor Macdonald that there are larger gains to be had from investments in light- and commuter rail in many of America's metropolitan areas.

However, I also understand that we are a people and a culture defined by our cars. It took 50 years to make us this way; and it may take another 50 -- and astronomical oil prices -- to change us.

Another blogging buddy, Shari Shapiro over at Green Building Law Blog, makes a very good point about "putting the first dollar of tax payer money into the most cost-effective initiative, to ensure those initiatives that have the greatest cost-benefit calculus get funded first and most robustly."

Shari's conclusion, with which I agree, is that "energy efficiency efforts work with the rule of the first dollar." The Obama stimulus may not be as heavily weighted towards efficiency as we'd like to see -- and that may be a failure of imagination about how to engage the states.

Finally, as Brooks points out in the Times, while "there is wide support for fiscal stimulus...there is no historical experience to tell us how to do it, and there is no agreement on how to make it work."

In the end, I hope Mr. Obama isn't setting himself up for failure by trying to bring a compromise to the table before the table has been set or by biting off more than he can chew before dinner is served.

Perhaps Mr. Obama has the magic to make this work, but I, like Brooks and others, remain skeptical.

"By this time next year," Brooks concluded his editorial this morning, "he'll either be a great president or a broken one."

Posted by greenskeptic at 2:00 PM