On Al Gore, Crises, and Sustainability 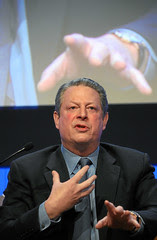 Image by World Economic Forum via Flickr"Short-term thinking has led to the climate crisis, just as it has led to the financial crisis," Al Gore told the group of us gathered at PNC Bank in Center City Philadelphia this afternoon. "Our financial system has been functionally insane -- we need a sustainable capitalism."

It's a message Mr. Gore as been giving over the past year, and one that seems to resonate with folks, and certainly with many in the room who were brought together by outgoing Pennsylvania Treasurer Robin Wiessmann.

"The solution to the financial, environmental and energy crises we face is the same," Mr. Gore opined. "Reduce our dependency on polluting sources and troubled assets."

He also suggested that we need to return to a long-term view, whether it's investing or protecting the environment.

Speaking of his own firm, Generation Investment Management, Mr. Gore suggested, "We set out to prove that you can outperform by adapting sustainability principles. We asked, 'When you use the word profit, what do you mean? Ninety days? Twelve months? Or seven years? We wanted a sustained profitability."

As I've written elsewhere on this blog, Mr. Gore has settled into his role as climate statesman very well. He has a kind of homespun-meets businessman demeanor that is appealing when he stays away from hyperbole.

I'm concerned about his overuse of the word "crisis," for instance, and his insistence on the "facts" about global warming, dismissing questions about variations in arctic ice calculations as relying on mere "factoids."

And I do wish he would stop using the allusion to the Chinese character for Crisis being "a combination of the characters for 'danger' and 'opportunity,'" which has been disputed by the University of Pennsylvania's Victor H. Mair

, professor of Chinese language and literature, and which I've written about elsewhere on this blog.

But he has a point when it comes to the long view. How can we expect economies, companies, or people in general to embrace sustainability when they are expected to think only of the next week, the next quarter, even the next year rather than in the lifetime of a business-cycle or a generation?

Posted by greenskeptic at 10:03 PM