On Al Gore, Twitter, Puppies, and Bacon (the Food, Not Kevin)

Twitter is an amazing animal. Yesterday, before heading to a meeting with Al Gore, which I wrote about last night, I decided to ask the Twitterverse what they wanted me to ask him.

Here is a sampling of the responses: 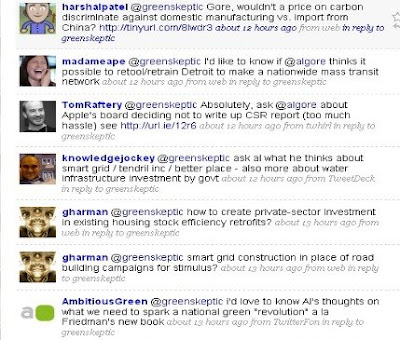 Pretty cool to have such a quick response from the Twitterverse. Thanks to everyone who responded.

In the end, I got to ask one question of Mr. Gore and I went with, "Do you think it is possible for traditional industries, such as the auto industry to adapt and change for the new green economy?"

His answer? "Many of us wish they had done so years ago instead of giving Toyota a 7-year lead in hybrid drive-train development," Mr. Gore said. "But I do think there are plenty of opportunities for industries to get on board now -- and those that see it will do so; those that don't will be gone."

Perhaps Mr. Gore will visit the green skeptic and tackle the questions above in Disqus comments, assuming he is a Disqus user.

(Note: As an experiment, I'm using the words Gore, Puppies, and Bacon in the title of this post.)

Posted by greenskeptic at 11:59 AM