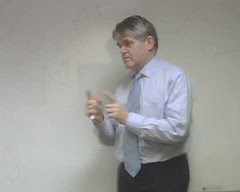 I just spent the morning with a group of folks at Ashoka meeting with Orri Vigfússon, the vodka tycoon (ICY), Ashoka and Goldman fellow, and flyfisherman who is single-handely rescuing Atlantic salmon from the brink.

According to NASF estimates, commercial open-sea fishing in the Atlantic has dropped by more than 75 percent in the last 15 years, and river anglers in several countries in areas where nets have been closed have reported substantial increases in salmon catches.

NASF estimates that in excess of five million North Atlantic salmon have been saved to date.

Orri told us that he needs 2-3 years to complete his work of purchasing and retiring the netting rights, then he wants NASF to turn its attention to restoring the historic salmon rivers of Central Europe, which he says is possible.

(P.S. Orri is not telling us how big was his last salmon in the photo...)

Posted via Flickr
Posted by The Green Skeptic at 12:11 PM

I wanted to thank you for the informative and enjoyable read. I have been sitting here with my coffee and laptop enjoying a Bassoo family evening. Again many thanks, warmest of regards Chris Bassoo, Toronto, Canada

Interesting article...sounds similar to a trend in the real estate sector which is the purchasing of environmental easements which can be very narrow in nature (ie. limiting development on specific parcel). My question is: If Mr. Vigfusson pays the salmon fishermen NOT to fish, what does this do to the overall supply and demand of the market? In the long term, doesn't this create a lack of salmon supply thereby increasing the cost to the consumer? Also, wouldn't this increased salmon value entice other fishermen to enter the market? These fishermen would have to be paid NOT to fish, right?

Another interesting view on global warming...

oh my god save the salmon...uh, what about the vodka guy basically side stepping the morality issue of underage drinking..why doesn't he pay liquor store owners not to sell his stuff, oh yeah..that's cuz he makes money

Here is an answer to johnnyboy's comment above, direct from Orri:

When we buyout fishermen, we actually buy out the right to fish and no other fishermen are allowed to use that right.

Also, we only buy out fishermen that fish for wild salmon. In theory this should raise the prices for the remaining fishermen but who are in any event getting fewer and fewer. In more and more countries it is no forbidden to sell wild salmon. The market however is virtually full of farmed salmon and the general public really does not know the difference.