Clean Tech: Nanosolar Cells, or What the...? 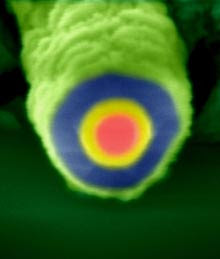 A friend of mine invoked Warren Buffett in a comment on an earlier post about nanotechnology on this blog some time ago, and I'm straying out of my Warren Buffett territory with this one. In other words, I don't really understand this stuff enough to invest in it, but it's cool.

Researchers at Harvard University have made solar cells that are a small fraction of the width of a human hair. The cells, each made from a single nanowire just 300 nanometers wide, could be useful for powering tiny sensors or robots for environmental monitoring or military applications. What's more, the basic design of the solar cells could be useful in large-scale power production, potentially lowering the cost of generating electricity from the sun.

Each of the new solar cells is a nanowire with a core of crystalline silicon and several concentric layers of silicon with different electronic properties. These layers perform the same functions that the semiconductor layers in conventional solar cells do, absorbing light and capturing electrons to create electricity.

To make the cells, Charles Lieber, a professor of chemistry at Harvard University, modified methods he'd previously used to make nanowires that could serve as sensors or transistors. He then demonstrated that his solar cells can power two of his earlier nanowire devices, a pH sensor and a set of transistors.

This is wild stuff. And something to watch, even if we don't yet understand it.

See the story in Technology Review

Here's a link to Lieber's Paper

Photo credit: Charles Lieber, Harvard University, "a cross section of silicon nanowire that converts light into electricity. The image has been colored to highlight the functional layers of the device. Each layer is made of silicon modified with another material that gives it distinct electronic properties."
Posted by The Green Skeptic at 8:38 AM

Thank you for your valuable contributions~
Sir Chancelot