Clean Tech: Wind Some, Lose Some 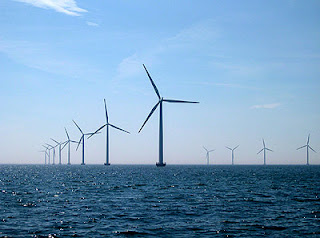 Why do people hate wind farms?

Sure they are huge; the turbines have a large footprint, and may even chop up a few birds. But they also generate a heck of a lot of power, and are comparatively free from negative environmental impacts.

From a design perspective the sleek white towers and aerodynamic blades seem, well, elegant and forward-looking.

It's clear that opinions about wind farms, however, blow whichever way the wind does.

When I was visiting some friends in northern New York late in the summer, I learned about objections to the St. Lawrence Windpower project, a project of ACCIONA SA (Other OTC:ACXIF.PK). Even my friends don't want it and speculated about graft and insider deals going on behind the scenes. (I couldn't corroborate any of the latter.)

The project is supported by many small, family farmers in the area as a source of additional income. Objections stem from many weekenders and locals who claim the farms will spoil their viewsheds, interfere with migratory bird patterns, create excessive ambient sound -- there are even some outrageous claims that wind turbines cause cancer or sterility.

Who's right? It's hard to say.

There seems to be little evidence that birds are victims of wind turbines and, as for the other claims, the jury is out on whether turbines or transformers can lead to physical ailments beyond certain setbacks.

But the debate keeps getting more charged.

This week, two developments speak to the complicated business of wind farms. And, for those of us who want the US economy to fully embrace alternatives, it's a one-two punch between China and our own backyard(s).

On the one hand, China National Offshore Oil Corporation (CNOOC) announced plans to venture into renewable energy with the first off-shore wind farm in China. The project will be situated 37 miles from shore, in the Bohai Bay, home of a significant part of the company's oil production, according to CNOOC president Fu Chengyu.

It's a welcome move by CNOOC (NYSE:CEO), which needs to diversify beyond oil, something also much needed in a country where cleaner growth is a top priority of its leaders. And there will likely be more of a push for such clean tech moves in China in the wake of the pending environmental embarrassment of the 2008 Beijing Olympics.

Why offshore? Offshore wind generation is more expensive, but has greater capacity. On land, siting is critical; you need enough open space, unobstructed wind patterns, and minimal interference by the natural or built environments. On the open water, it is easier to capture sustained, higher wind speeds; there less surface resistance, especially in deep water.

But on sea as on land, it turns out, you still get a "Not In My Back Yard" (NIMBY) reaction.

This week in Massachusetts, the Cape Cod Commission denied Cape Wind's application to bury electric cables in Nantucket Sound. The company needs to lay the cables on the Sound floor to connect its proposed 420-megawatt offshore wind farm to the state power grid.

Cape Wind plans to challenge the Commission's decision; the Commission said it did not have enough information to make a decision. The proposed wind farm will consist of 130 GE 3.6 megawatt wind turbines, capable of supplying most of the electricity needed in Cape Cod, Martha's Vineyard, and Nantucket combined.

So what's holding it up? Although the farm will be located more than 5 miles away from the Cape Cod coast, the turbines will stand -- from blade tip to water's surface approximately 440 feet -- and the transmission lines connecting the project to the grid crosses land controlled by state and local authorities.

Supporters, among them even some green groups, posit that the benefits outweigh the losses, among them renewable energy, improved air quality, lower electricity bills, and added security and reliability for the Northeast power grid. And even Audubon has discounted the impact on birds.

A recent global wind mapping project may help guide where to site wind farms for maximum return in the future. But what happens when a Nantucket Sound or the St. Lawrence Seaway makes the top of the list?

That question is a complicated one, and it often involves some big, influential neighbors.

But the larger question is do we want to invest in alternative energy or do we want to continue to rely on foreign oil, domestic coal, and other polluting sources?

With oil flirting with $90, it seems imperative to put our objections to rest and start turning ill-winds into gains.
Posted by The Green Skeptic at 9:23 PM

"There seems to be little evidence that birds are victims of wind turbines"...

I'm NOT going to doubt it but I do have to say that when I was a kid that I was told that many if not most bird flyways where very similer to where the wind was fairly constant in speed and direction...

Isn't that were some of the wind turbine farms are setup?

I totally agree. I think wind energy is an excellent alternative to relying on oil and other fossil fuels.

I attended a Southern New England Planning Event recently in Hyannis and the Keynote speaker on one of the lunch sessions was a guy called Greg Watson. He is with the State of MASS and was speaking about how the wind farm inititiave is one of many that look to satisfy rising demand on the existing grid by alternate means that buildling new plants. The Cape Cod wind farm is a collaborative effort between the three states that share that coastline.

I say hats off to the thinking behind this initiative. Of course it will cost some to get the relevant cables in place to transfer the power buy my guess is that it is a heck of a lot less than building a new plant.

His key point was rather than replicate plants to meet growing demand supplement with alternates. Friendly to carbon emmissions, more cost effective and more sensible all round.

This kind of thinking needs to be more wide spread.

If you want to read more on this subject, WorldChanging has an interesting post today (22 October)on China's investment in energy by Mara Hvistendahl: http://www.worldchanging.com/archives/007449.html

Thanks, Halibonian. I agree we need to foster this kind of thinking.

And thanks for mentioning Greg Watson, Vice President for Sustainable Development & Renewable Energy at the Mass Technology Collaborative, and a blast from my past. We worked together in The Nature Conservancy's Eastern Region a number of years ago. Good to hear what he's up to.

I don't understand at all the objections to windmills from an "aesthetic" point of view. I find them mesmerizing and an asset to what is otherwise empty country. I certainly think we could make far more use of windpower. Several times a year I drive the straight and oh-so-boring stretch of Highway 401 in Ontario from Toronto to Windsor (borders with Detroit). The entire drive is spent fighting the mighty crosswind, and there are no windmills present. The highway could be lined with them; there're already power towers marching alongside. Nuff said.

Another irony may be that as the climate continues to warm, under the burden of fossil fuels, those very birds may no longer be inclined to migrate.

The effects of global climate change will kill far more birds than the turbines will, so that objection is completely off-base. People can always find a fig leaf for their true NIMBY objections. What's sad is the fake environmentalism of wind farm objectors lets reactionary critics say "Those environmentalists can't even make up their minds, they're against everything."