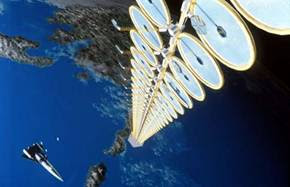 One of our favorite clean tech writers, Tyler Hamilton of the Toronto Star has an intriguing post about the space race for solar energy development. No, this isn't about creating a new "man on the moon" mission to catalyze investment. This, deployment of solar receptors and technologies into space. Maybe getting closer to the source generates more energy?

His Clean Break column this week talks about how a U.S. government agency is promoting the idea of space-based solar technology and putting up some serious money.

The National Security Space Office, a part of the U.S. Department of Defense, posits that energy is a security issue and that such concerns, along with the need for addressing climate change through advancements in technology, calls for a massive government investment in space-based solar power systems.

NSSO proposes a 10-megawatt pilot, which could, Tyler says, "spur private investment in commercial ventures, much like early government investment in the Internet and GPS eventually transformed the way we do business."

Perhaps space is the final frontier for solar. We can hear Scotty calling out to Kirk, "I canna get no power Captain." To which Kirk replies, "Move a little closer to the sun, Scotty."

Or the full article: Tyler in Toronto Star
Posted by The Green Skeptic at 8:10 AM

Hey! Your blog is great, I think it's so cool that you're grappling with these issues. Check out this great opportunity I just found out about- the BR!CK Awards- at www.brickawards.com

I do not totally agree with you from an esoteric point of view. If you view my blog, and read it, you will see why. I cannot explain in this short space my whole point of view

Not sure to what ava414's point of view is -- hard to decipher from her blog, which is more enigma than explanation. But I don't like to reject comments unless they are offensive or completely irrelevant.