IMAGINE: John Lennon Piano on Tour with Mission of Healing and Hope 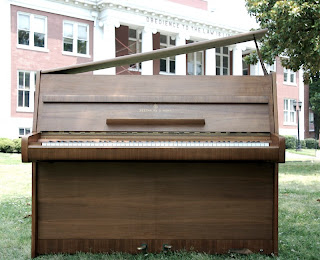 This sounds like one of those conceptual art pieces John Lennon's widow Yoko Ono was famous for over 30 years ago. The piano on which Lennon composed his anthem "Imagine" is touring sites of violent death in an attempt to bring healing and call attention to violent crime.

The Wall Street Journal (imagine seeing John Lennon on the front page of the WSJ!) reported this morning that the tour was organized by the current owners of the piano, singer George Michael and his longtime partner Kenny Goss. The pair bought the piano at auction from a private collector for $2.1 million.

Naive symbolism? Folly in the face of the prevalence of violent crime? The kind of thing John would have done in his post-Beatles activist youth? Maybe. But for the people who have experienced it, such as Alec and and Gabi Clayton in Olympia, Washington, whose son, Bill, took his own life at age 17 after he was attacked in a hate crime, it may provide healing and call attention to the types of violence that are all too common across America. (Read Gabi Clayton's blog)

The tour includes anniversary appearances at the sites of world tragedies, such as the campus of Virginia Tech in Blacksburg, Virginia, New York's World Trade Center, the federal building in Oklahoma City, the Branch Davidian compound in Waco, Texas, and the Lorraine Motel in Memphis, Tennessee, on the 39th anniversary of Martin Luther King's assassination on the balcony of what is now the National Civil Rights Museum.

It all started last November at Dealey Plaza in Dallas, Texas, on the 43rd anniversary of the assassination of president John F. Kennedy. The tour was conceived after the piano was showcased at the IMAGINE exhibition at the Goss Gallery in Dallas last year.

"Imagine a world without violence, a world of peace. This sentiment echoes the lyrics to John Lennon’s 1971 song, 'Imagine,'" claims the Lennon Piano Tour website.

The Steinway upright is being photographed at each site for a possible book and documentary to "spread a worldwide message of peace, transcending time, cultures and boundaries."

Like the "Free Hugs Campaign," the Lennon Piano Tour is a simple act that touches people directly with a message that speaks louder than words of protest.

"This is about hopes and dreams and the world condition," Goss told the Associated Press last April.

The tour will likely conclude in December in front of the Dakota, where Lennon was murdered in 1980.

View a slide show of the stops along the tour: Lennon Piano. An RSS feed for updates is also available.

Watch the video of the Imagine Piano arriving at the Clayton's home and being played by proto-blogger and singer/songwriter Steve Schalchlin.

A moving tribute to a lost son.
Posted by The Green Skeptic at 11:31 PM