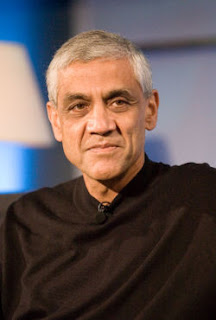 "What is a material 'climate solution' in [Vinod] Khosla's world?"

That's one of the things Tyler Hamilton asks Khosla, founder of Khosla Ventures and a long-time partner with venture capital titan Kleiner Perkins Caufield & Byers (and one of our favorite social capitalists in his Toronto Star column today.

The answer: "What's clean, cost-competitive, can be deployed on a large scale and is capable of dramatically reducing greenhouse gas emissions?"

Among the other insights Tyler shares: "Khosla more or less divides clean-technology investments into two camps: those that can make real but relatively small changes and those that can make huge changes to the world's environmental problems, most notably climate change.

"'There's a difference between a good green investment and a climate solution,' he told me last week in an interview. 'I came into it from the point of view that asks what the large solutions are that actually matter to climate change.

"'I love PV (solar photovoltaics), and we have investments in PV, but I don't think it will be relevant to climate change in the next 20 years.'"

We have to stop playing with toys, Khosla tells Hamilton, who is also author of the Clean Break blog.

"Khosla, in addition to his other green investments, is placing a big bet on solar-thermal technology – what he considers the best weapon in the 'war on coal power generation.' To a lesser extent, he's also increasingly drawn to the potential of enhanced geothermal power.

"'Solar thermal has been ignored completely in favour of sexier photovoltaics,' he says. 'When I started looking at solar thermal early last year, I couldn't find anybody who was paying attention, which sort of surprised me. It's a great technology, and about one-fourth the cost of PV with the kind of reliability that utilities actually like.'"

"By solar thermal," explains Hamilton in a sidebar, "Khosla is referring to concentrating solar power, as opposed to solar thermal technologies used to provide space heating and hot water in buildings, or conventional solar power, where the sunlight strikes a PV cell and is converted into electricity.

"Concentrating solar power uses parabolic mirrors to focus the sun's energy on a single point, creating high temperatures that generate steam from a fluid. The steam spins a turbine, just as it would in a coal plant, which in turn generates electricity."

Khosla is also ahead of many others in his consideration of another important investment area: next-generation, ultra-high-voltage DC transmission technologies and infrastructure.

To Khosla, suggest Hamilton, "getting off coal and other fossil fuels means playing to our clean-energy strengths and connecting our energy sweet spots to a large, trans-national grid that can efficiently carry power over long distances."

This irks many extreme greens -- and bothers some NIMBY opponents of big alternative projects. But it is a solution that needs to be investigated and invested in.