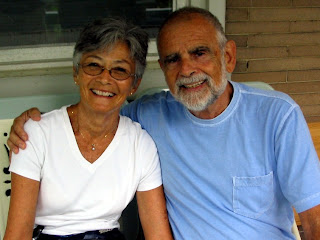 My friends Howard and Marika Stone, founders of 2young2retire.com have just been named 2007 Purpose Prize Fellows. The Purpose Prize, a major new initiative started by Civic Ventures, invests in Americans over 60 who are leading a new age of social innovation by providing five awards of $100,000 and ten awards of $10,000.

The winners reveal the wide variety of backgrounds and experiences that those over 60 bring to the task of solving some of society's most pressing problems in what used to be called the retirement years. (Finalists include Interface's Ray Anderson, Project 18's Gloria Jackson Bacon, the Reverend Sally Bingham, who is leading a religious response to global warming, Richard Cherry of New York's Community Environmental Center, and Bridges to Understanding founder Phil Borges.)

"As the first wave of America’s 77 million baby boomers turn 60, The Purpose Prize winners are doing what society least expects people over 60 to do: innovate," said Marc Freedman, founder and President of Civic Ventures.

"These men and women - some national figures, some local heroes - disprove the notion that innovation is the province of the young and show us the essence of what's possible in an aging society."

Howie and Marika started "Too Young to Retire" after successful careers in international advertising sales and public relations/journalism. Rejecting the idea of retirement as "a great place to visit but who would want to live there?" Howie built a coaching practice to help other mature people skip retirement and discover their own continuing passions and Marika pursued her mission of "helping people -- especially women of a certain age -- achieve their full potential."

The couple wrote a book, Too Young to Retire: An Off-Road Map to the Rest of Your Life and started the web resource 2young2retire.com.

Howie and Marika have long inspired me to keep focused on the purpose and meaning of my life. In fact, it was Howie's informal coaching some 16 years ago that led me to realize I could leave a publishing career for work with The Nature Conservancy.

Congratulations to Marika and Howie on being named 2007 Purpose Prize Fellows!
Posted by The Green Skeptic at 1:05 PM