Global Climate Change: "How business is starting to tackle climate change" - The Economist 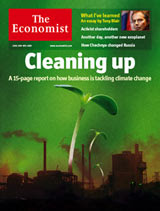 This week's Economist features a cover story on "How business is starting to tackle climate change, and how governments need to help."

These days businesspeople are falling over each other to prove their greenness. That's partly because the politics of climate change have moved so fast in America. Five bills in U.S. Congress would introduce federal controls. Most of the serious presidential candidates for 2008 favour them.

California now has binding targets to cut CO2 emissions, and other states plan to follow. Many chief executives have come around to the view that federal controls would be better than a patchwork of state laws. And if federal regulations are coming, companies need to support them, in order to be involved in designing them. Hence the need to be seen to be green.

But companies are not driven purely by fear of regulation. Cleaner energy means new technologies -- and new money to be made.

Read more: The Economist: Cleaning Up
Posted by The Green Skeptic at 11:46 PM