Review: A Sea in Flames by Carl Safina 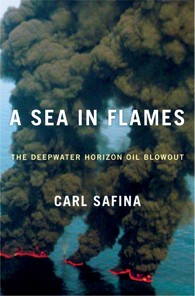 I wanted to like Carl Safina's new book, A Sea in Flames: The Deepwater Horizon Oil Blowout.  In fact, I did like it for the first 40 pages or so.

Safina is at his best in this book when reconstructing the events of the blowout itself and sharing the stories of those in the region whose lives felt the negative impacts.

He's skillful at building narrative tension, explaining what went wrong and why, describing decisions that were made or not made that led to the explosions, the subsequent destruction of the oil rig and death of eleven workers.

But Safina lets his journalistic guard down and his opinions, speculations, and grinds personal axes and he loses me.  There are one too many asides such as, "Really? Is that all you've got? Sorry; I have a lot of respect for professors, but I don't believe her," he writes in reaction to a professor who was demonstrating how to sniff food for traces of oil.

Also annoying is Safina's juvenile and relentless butchering of names (Admiral Thad Allen, of the Coast Guard, becomes the "Thadmiral").  Safina loses control of his story -- a story, well-told as certain passages are in this book, about which we should be left to make our own judgments.

And then, as almost an afterthought, Safina has a change of heart about the government's handling of the disaster, after sitting down with Dr. Jane Lubchenco, head of NOAA, and now-retired Admiral Allen, to hear their side of the story.  A better approach, in my view, would to have been to write the book with that perspective and knowledge, simply letting the story stand on its own.

I don't blame Safina for this; I blame his editors at Crown, who clearly didn't do their jobs in the rush to get this book out before most Americans thought the "Deepwater Horizon" was a new water ride at Six Flags rather than the disaster that captivated us for most of the summer of 2010.

The story of the incompetence, poor decisions, neglectfulness, hubris and bad judgment on the part of BP, Transocean, Halliburton, and others is one that needs to be told.  And when Safina sticks to that story, he tells it well.  We don't need the author to point out the absurdity of some of the things said by BP's then-CEO Tony Hayward; his statements and blunders do a fine job on their own.

Instead, Safina gives us knee-jerk environmental rhetoric and juvenile attacks on those involved.  So much so that I kept putting the book down in frustration, but picked it up again hoping Safina would tell me something I needed to know about the disaster.

He did.  My three-take-aways from the book: the disaster was preventable; we were neither prepared for this nor are we prepared for the next such disaster; and it didn't turn out to be as bad as the media led us to believe it was going to be.

I'm a fan of Carl Safina's Eye of the Albatross and Song for the Blue Ocean; both books are illuminating and enlightening.  Where A Sea in Flames sticks to the story of the Deepwater Horizon disaster, Safina succeeds; too often, however, he fails to deliver the goods and lets his own story – of his shock, anger, and second thoughts -- get in his way.

The book is not a disaster, but its troubles -- like the blowout itself -- could have been prevented.

Posted by greenskeptic at 8:09 AM