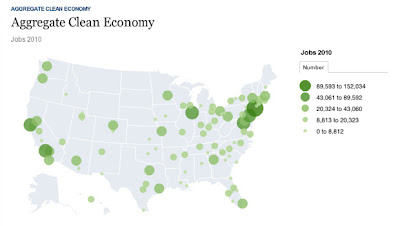 A report released yesterday, “Sizing the Clean Economy,” which is based on the Brookings-Battelle Clean Economy Database, ranks the Philadelphia metro area 5th among the 100 largest metro areas for overall size of its share of the clean economy in the US.

The database from which these data are derived is a collaborative effort of Brookings Metropolitan Policy Program and the Battelle Technology Partnership Program.

The report ranks the size, growth, and geography of the “clean” economy in the US, which it defines as "economic activity—measured in terms of establishments and the jobs associated with them—that produces goods and services with an environmental benefi t or adds value to such products using skills or technologies that are uniquely applied to those products."

Other points of interest to the region:

According to the study, "the clean economy grew more slowly in aggregate than the national economy between 2003 and 2010, but newer 'cleantech' segments produced explosive job gains and the clean economy outperformed the nation during the recession."

The report points to the recently established energy innovation hubs, such as the Greater Philadelphia Innovation Cluster for Energy Efficient Buildings (GPIC), as an important factor in continued growth for the sector.

Among the other recommendations for scaling up the clean econmy, the report's authors suggest, "Ensure adequate finance by moving to address the serious shortage of affordable, risk-tolerant, and larger-scale capital that now impedes the scale-up of numerous clean economy industry segments."

They also recommend the creation of a water sciences innovation center and the establishment of a regional clean economy consortia.

"Metropolitan areas, large and small, are now and will increasingly be the nation’s critical centers of clean
economy talent, innovation, and finance and so its top hubs of commercialization, deployment, and trade," the report concludes. "Regions and metropolitan areas, in short, are not a part of the national clean economy; they are that economy."

You can find interactive maps here to dig deeper into the findings.

Posted by greenskeptic at 11:20 AM