Is that a Banana in Your Pocket or Are You Radioactive? 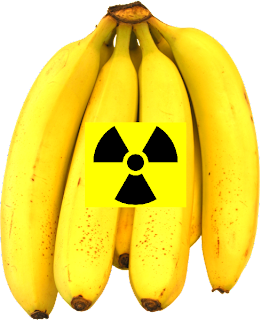 "Banana Equivalent Dose" was a concept new to me when it came to my attention via that font of much wisdom and arcana, Paul Kedrosky, who got it from William Gibson's Twitter stream (@GreatDismal).

According to its Wikipedia entry,  "banana equivalent dose (or BED) is a concept to place in scale the dangers of radiation by comparing exposures to the radiation generated by a common banana."

Many foods are naturally radioactive, and bananas are particularly so, due to the radioactive potassium-40, or 40K they contain. Bananas are radioactive enough to regularly cause false alarms on radiation sensors used to detect possible illegal smuggling of nuclear material at US ports.[3]

A radiation dose equivalent of 100 μSv (10 mrem, or 1,000 BED) increases an average adult human's risk of death by about one micromort – the same risk as eating 40 tablespoons of peanut butter, or of smoking 1.4 cigarettes[6]

Here is a link to the full entry: Banana Equivalent Dose.

In the coverage of the Japan's Fukushima nuclear plants SI multiples have been used, including the millisievert  and microsievert.  There was some confusion about this yesterday in the news as a spike was observed.

A millisievert (mSv) is a thousandth of a sievert and a microsievert is a millionth of sievert.  A chest x-ray has 0.1 mSv.  (Peter Wehrwein,editor of the Harvard Health Letter, has a good discussion of the topic at the Harvard Health Blog.)

Yesterday's spike at the Fukushima Dai-chi plant was 400 mSv per hour.  Sounds like a bunch of bananas.

Posted by greenskeptic at 10:53 AM