Once the top dog in clean energy, the United States dropped to third place in terms of investment, falling further from the top spot it held in 2008, with only $34 billion in private clean energy investments.

China continues to lead, according to a new report by the Pew Charitable Trusts, attracting a record $54.4 billion in clean energy investments in 2010 -- a 39 percent increase over 2009 and equal to total global investment in 2004. Germany saw private investments double to $41.2 billion and was second in the G-20, up from third last year. 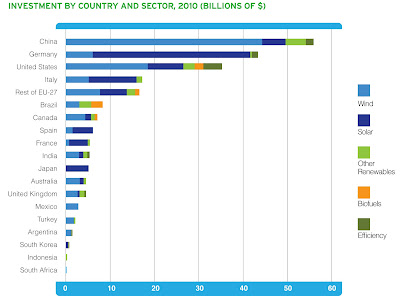 The good news is: investment in clean energy has bounced back from the recession, at least globally.  The question is, will the US be able to keep pace in the years to come?

That China leads will come as no surprise to readers of The Green Skeptic.  That the US is slipping further down the ladder is more disturbing to those of us who see the new green economy as a platform for our competitiveness in the global marketplace.

Posted by greenskeptic at 10:46 AM