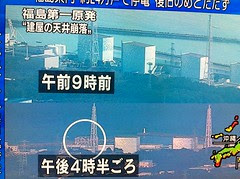 Image by Masaru Kamikura via FlickrWe all watched with grave concern and deep admiration this week as workers at the Fukushima Daiichi nuclear plant in Japan struggled to keep a crisis from turning into a catastrophe in the wake of the devastating earthquake and tsunami.

As I write this, the severity level has been raise from a 4 to a 5 and water cannons are firing jets of water onto overheating reactors.

Michael W. Golay, professor of nuclear science and engineering at the Massachusetts Institute of Technology, examines the missteps that led to the crisis at Fukushima Daiichi in Yale360.

While the debate about the Fukushima disaster's impact on the future of nuclear energy heated up, The Next Big Future listed Deaths per TWh for all energy sources, including some surprises.

And Rob Day, aka @cleantechvc, posted his thoughts and an excellent slide show on Cleantech Venture Capital in 2015.

Jim Tankersly has a great piece in the National Journal on the unpriced risks facing the US economy: Flooded.

And, finally, probably the coolest husband and wife bloggers on the planet, Joanne and Fred Wilson, both had compelling posts this week.  First read the Gotham Gal's post on Britta Riley, Environmental Entrepreneur  and Fred's post on why we should support #startupvisa and then take action at Votizen.

Have a great weekend everybody. And continue to pray for the workers at Fukushima and people of Japan.

Posted by greenskeptic at 1:22 PM