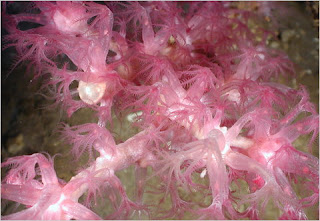 "How much oil seeps up from the seabed, aside from oil spills? Quite a lot, and a fascinating group of sea creatures thrives on it," writes William Broad in the New York Times Green Blog about sea creatures that thrive on natural oil seeps in the deep, dark ocean: Dark Ecosystems Nurtured by Oil.

"In 2003, the National Research Council released a comprehensive study, 'Oil in the Sea III: Inputs, Fates and Effects.' The 265-page report paints a global portrait of the petrochemical flows, both natural and unnatural. It turns out that the largest contributors [of petrochemicals in the ocean] far and away are the natural seeps, like those across the bottom of the gulf that power the dark ecosystems."

Of course, as one commentator pointed out, the BP Deepwater Horizon spill has leaked "an amount equal to 75 percent of the annual natural seepage worldwide, except it has occurred in 2 months in one specific location."

Posted by greenskeptic at 8:02 PM