Deadly Diet: This is Your Albatross on Plastic 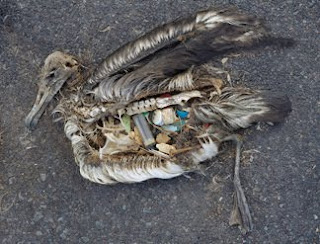 Ah! well a-day! what evil looks
Had I from old and young!
Instead of the cross, the Albatross
About my neck was hung.

--Samuel Taylor Coleridge, "The Rime of the Ancient Mariner"

Plastic, plastic, and not a drop to drink?

Photographic artist and activist Chris Jordan has had a lot of attention for his photographs of albatross chicks who perished on Midway Atoll from a diet of plastic. (That's one of his images to the right.)

Here is a slide show that appeared in the Spring 2010 issue of the literary journal Ecotone: Reimagining Place:

Midway: Message from the Gyre by Chris Jordan

This is a travesty about which we should all be ashamed. Will we be like the mariner, forced to pay for our treatment of these legendary birds?  Or will we wake up and clean up our own messes as our mothers instructed us to do as children.

The Poet is not unlike this Prince of the Clouds
who rode out the storm and suffered the slings
and arrows; exiled on dry land, amid the jeering crowds,
again and again he's dragged down by the weight of those wings.

(Translated by from Paul Muldoon's translation; Muldoon's new book, Maggot, may feature one of Jordan's images on the cover)

Will we be dragged down by the weight of the albatross's wings? Those plastic-infused wings wrapped around our necks, choking us with the weight of our own detritus.

Posted by greenskeptic at 2:10 PM