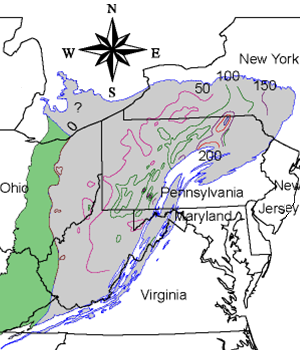 With some of the world's largest and best natural gas reserves found in the northwestern part of the state, significant coal reserves already providing electricity for much of the northeastern US, and the country's largest grid operator (PJM) located in King of Prussia, Pennsylvania is already an energy powerhouse.

Increasingly, Pennsylvania is attracting and growing companies in the emerging cleantech arena, including two of the world's largest wind companies (Gamesa and Iberdrola), smart grid and demand response (such as Viridity Energy), and emerging technologies from biofuels to batteries and storage.

Why this convergence? According to Pennsylvania Secretary of the Department of Environmental Protection John Hanger, several key policy decisions made over the past several years, along with efforts and incentives to attract companies from as far away as Spain and Greece, combined with the existing energy infrastructure to make the Commonwealth very attractive.

"Over 50 percent of the inquiries the state is getting from companies looking to relocate here are from the cleantech sector," Secretary Hanger told a group of business leaders at the Greater Philadelphia Chamber of Commerce's "The Future of Energy" briefing yesterday.

His remarks were echoed by Alice Solomon of Select Greater Philadelphia, who noted that of the 124 companies she's talking to about the region, 20 percent are alternative energy companies. Solomon, speaking at last week's Clean Energy Conference hosted by PennFuture in Camp Hill, said that strategic market location and a rich infrastructure are attracting these companies.

Part of that rich infrastructure statewide is the vast natural gas reserves that lay a mile-deep under much of Pennsylvania and adjacent states, known as the Marcellus Shale formation.

"Natural Gas is the bridge to the clean energy future," Secretary Hanger noted at last week's conference. "And Pennsylvania will soon produce 10 percent of the nation's natural gas. Marcellus is a game changer."

Wither coal? As my pal Gregor MacDonald pointed out in his Gregor.us post yesterday, "global coal consumption was flat in 2009, as consumption of oil and natural gas fell. Coal remains the big story, and will become an even bigger story as we head to 2015."

Secretary Hanger, when asked at yesterday's Chamber briefing about coal's future in the "clean energy" mix said two things. First, that Pennsylvania has policies in development focused on carbon capture and storage (CCS), and second, that the "coal industry must decide whether to fight a carbon constrained future or to get behind CCS and embrace that future."

The coal industry is not alone in resisting change. The natural gas industry continues to fight Pennsylvania Governor Ed Rendell's push for a severance tax on natural gas extracted from the state's reserves. Rendell's cause may have received a boost earlier this week when a gas well explosion and fire shut down drilling in Clearfield County.

"We needed a severance tax even before the accident," Rendell told reporters from the Philadelphia Inquirer.

Secretary Hanger's remarks at the Chamber were more pointed, "Every other state has a severance tax on their resources extracted. It's crazy that Pennsylvania doesn't have a severance tax in place for this incredible reserve."

Clearly, as we've argued on this blog before, there is no silver bullet to meet our energy needs and security. So, too, is there no one place that will meet those needs. Pennsylvania, however, with its combination of resources, infrastructure, supportive policies seems poised to become a "keystone" in the future of energy in the United States.

Posted by greenskeptic at 10:57 AM