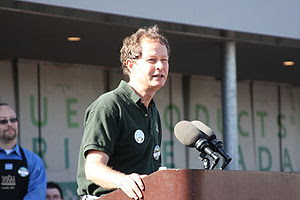 Whole Foods CEO John Mackey is in hot water with environmentalists, liberal media pundits, and the climate crisis police for expressing his doubt about the scientific consensus around the causes of climate change.

The hulabaloo stems from the following passage from The New Yorker profile by Nick Paumgarten:

"One of the books on the list was 'Heaven and Earth: Global Warming—the Missing Science,' a skeptical take on climate change. Mackey told me that he agrees with the book's assertion that, as he put it, 'no scientific consensus exists' regarding the causes of climate change; he added, with a candor you could call bold or reckless, that it would be a pity to allow 'hysteria about global warming' to cause us 'to raise taxes and increase regulation, and in turn lower our standard of living and lead to an increase in poverty.' One would imagine that, on this score, many of his customers, to say nothing of most climate scientists, might disagree. He also said, 'Historically, prosperity tends to correlate to warmer temperatures.'"

"I have my own views, and they're not necessarily the same as Whole Foods'...People want me to suppress who I am. I guess that's why so many politicians and C.E.O.s get to be sort of boring, because they end up suppressing any individuality to conform to some phony, inauthentic way of being. I'd rather be myself."


Now, I don't shop at Whole Paycheck, frankly because it's always seemed overpriced and under quality. I prefer Trader Joe's or our local food co-op. And Mackey has some pretty wacky views -- his embracing of the "Course in Miracles" is example enough -- and has done some bonehead things (remember the Wild Oats scandal).

But the fact that Mackey can't express his doubts about the "consensus" on climate change without people calling for his head is just ludicrous. Give the guy a break. Don't patronize his store if you don't agree with him, but stop the witch hunt, please. You're acting as bad as your enemy.

Read the whole CEO profile in The New Yorker

Posted by greenskeptic at 1:00 PM