I've been long LED lighting manufacturer $CREE for a long time, as readers of this blog know. Today, Cree continued to impress me with its quarterly earnings release, beating estimates and generating record revenue.

“We continued to execute very well in Q2, as we delivered record revenue and net income,” stated Chuck Swoboda, Cree chairman and CEO. “LED lighting adoption continues to gain momentum and our near term focus is on factory execution and capacity expansion. Our strong balance sheet further enhances our leadership position and supports our mission of leading the LED lighting revolution.”

Here are other highlights from the press release: 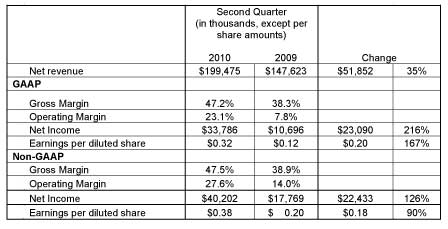 * Purchased a facility for manufacturing expansion in Huizhou, China

(Disclosure: I hold a long position in CREE. This post is for informational purposes only and is neither intended to be investment advice nor an offer, or the solicitation of any offer, to buy or sell any securities.)