StockTwits: Break Away from the Usual Market Noise

Annoyed by what you hear on CNBC? I know I am. Seriously, I think their financial pundits have had as much if not more to do with the panic in the market than short sellers. And the other business news coverage is just as bad.

As Jim Cramer says, "They know NOTHING!"

But what if you could eavesdrop on and converse with other traders, amateur analysts, and market enthusiasts? What if you could have a dialogue about stocks you're interested in or actively trading? What if you could bring your own knowledge and interest to the conversation about investing, be it alternative energy and clean tech or whatever.

Well, now you can. Try StockTwits. It just launched with a simple design that will be familiar to users of Twitter or other social networking platforms. Here's a screen shot of my feed stream: 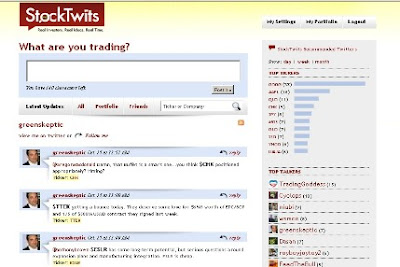 Developed by Soren Macbeth and Howard Lindzon, StockTwits was built on the Twitter API as a way to aggregate Twitter conversations about stocks, trading, and financial markets. A number of us have been using it for months now (and you can too) simply by adding a dollar sign before a stock ticker (such as $FSLR).

A simple idea and a pretty cool concept. The folks at betaworks, which focuses on seed stage Internet media, must think so, too, as they added StockTwits to their portfolio with an investment last month.

I'm interested in using StockTwits to engage with like-minded (and contrarian) clean tech and green energy investors, contribute to the knowledge base about some top performers, as well as learn more about companies I've missed or overlooked.

Posted by greenskeptic at 10:42 AM