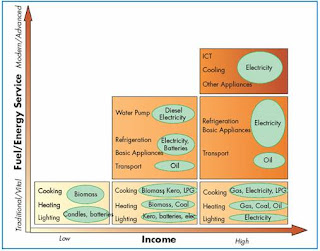 Energy is a basic human need and underlies all economic and social activity. It is an "indispensable element of sustainable human development," according to the International Energy Agency (IEA). "Without access to modern, commercial energy, poor countries can be trapped in a vicious circle of poverty, social instability and underdevelopment."

And yet, today, according to a 2005 UNDP study, Energizing the Millennium Development Goals, "millions of households in the developing world still lack access to safe and reliable energy and pay high prices for poor-quality substitutes. Moreover, poor people spend much of their income on energy, more than a third of household expenditures in some countries."

That would be bad enough were it the only impact, but poor households, especially women, also "devote a large portion of another important asset, their time, on energy related activities--women and young girls spend upwards of 6 hours a day gathering fuelwood and water, cooking, and agro-processing."

Worldwide, around 2.4 billion people still use solid fuels, including wood, dung, agricultural waste, and coal to meet their household energy needs. Cooking and heating using open fires or traditional, inefficient stoves results in health-compromising indoor air pollution, and causes up to 1.6 million deaths every year, according to the Baker Institute Energy Forum at Rice University in Houston. Most of those deaths involve women (60 percent) and children under five with acute respiratory infections.

In some countries, Baker Institute researchers claim, "this neglected health risk is to blame for 3.7 percent of all deaths, making it the most lethal killer after malnutrition, unsafe sex and lack of safe water and adequate sanitation."

It's a vicious cycle: poor households do not have the resources to obtain cleaner, more efficient fuels and appliances; so they rely on solid household fuels and limited, often inefficient appliances, which in turn reduces the potential for economic development and affects their health and productivity, keeping them from making their way up the poverty ladder.

One can argue that achieving many of the UN Millennium Development Goals by 2015 is extremely difficult, if not impossible, without addressing the need for increased access to cleaner, affordable, and safer energy.

Microenergy or small, distributed energy generation may be the key to providing energy services to the global poor. Small-scale solar installations are now affordable for application in most rural, developing countries. Wind turbines, geothermal, and more efficient biomass or biogas stoves can reduce the impact of indoor air pollution and forest degradation.

As microfinance has revolutionized the access of financial services to the poor -- by no means is that revolution complete -- so, too, can microenergy help leverage the rural poor out of their vicious cycle of poverty.

And just as there is a ladder out of poverty, there is a corresponding ladder of energy (see diagram above). Increasing energy access to the world's rural poor can contribute to reducing global poverty. Indeed, you can't reduce rural poverty without it.

Posted by greenskeptic at 7:26 AM