On Panic and an Opportunity in the Midst of Crisis 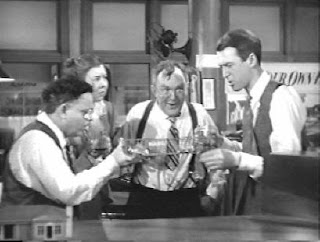 "Can't you understand what's happening here?" George Bailey says in "It's a Wonderful Life," as the crowd gathers in the Bailey Brothers Building and Loan to make a run on their accounts.

"Don't you see what's happening? Potter isn't selling. Potter's buying! And why? Because we're panicky and he's not. That's why. He's pickin' up some bargains. Now, we can get through this thing all right. We've, we've got to stick together, though. We've got to have faith in each other."

The scene ends with the financial wizards of the BBB&L toasting the last two dollars they have before closing time. Hope springs eternal, even in the worst of times.

I kept thinking of that scene during the past few weeks and, while there are comparisons to that earlier era, the "Debtpression" is different from the Depression. And while the seemingly socialist tools of nationalizing banks and credit institutions seems like a "New Deal," I don't think it is the answer and may end up being a raw deal.

We need to rethink the whole premise of our economy and of what growth looks like, and what our country is built upon. For far too long, our economy has been built on unsustainable growth, and greed.

When housing starts are the bell-weather of growth and consumption fuels the GDP, what do we expect? What do you do when new housing slows down? Make loans more available to those who can't really afford the mortgage you're selling. And extend their credit so they can buy more things to fill up those houses. How long could that have gone on?

We need to rethink the foundational elements of our growth. Why can't growth be equivalent to healthy communities, to greater efficiency, and improved and better uses of existing infrastructure? Why can't our economy be built on sustainable innovations?

Fred Wilson of Union Square Ventures and author of the popular blog, A VC, wrote today about the effects of the economic downturn on his portfolio companies. And (pardon me Fred if I've misinterpreted) it seems that he actually finds opportunity for these companies in the challenging times we're facing.

He writes, "Much has been written about how the 'nuclear winter' of 2001-2003 led to many of the innovations we've been tapping into since. Clearly the capital efficiency revolution was fanned in the nuclear winter. When capital is scarce, smart people figure out how to do more with less. So first and foremost, let's all take advantage of this capital efficiency to get our costs down and build businesses with even more operating leverage. And hopefully there are new tricks out there that we can use to get even more capital efficient."

Gregor Macdonald, an oil analyst and energy sector investor, who also focuses on the coming transition to alternatives, seems to share this view of a leaner, more efficient financial engine.

"What’s needed now is a flowering of smaller investment banks and private equity, to fund the next wave," he writes on his blog Gregor.us. "The financial landscape should become 6 inches high, and 3000 miles wide. We are going to have to cut in the opposite direction, from the current consolidation in US banking. And it will take time. But I think what the country needs is to see a lively investment community in all major cities. Not just New York and Silicon Valley."

I can't help thinking that out of this crisis -- if we can avoid the noise and abject panic -- can come a new path; a second chance, really. A path that is fundamentally about triple-bottom value creation, where profits are good, but so is people and the planet.

And I keep thinking, as I know Gregor does, that the three areas crying out for investment and that could provide a foundation for a new economy are energy, infrastructure, and new financial service models. Really, a new green economy.

So, I'm trying to pay attention to a different kind of noise right now -- although it has been tough. It's a bunch of conversations, dialogues, monologues, and even rants by people a lot smarter than me in this arena. It's happening in a community that has a gathered on services like Twitter and StockTwits and Disqus. And it's a more hopeful noise. Concerned, yes, but already beginning to think about what happens post-panic.

As Andy Swan put it in his blog tonight, starting to move from despair to opportunity:

STOP leveraging your bottom-calls.
STOP thinking in terms of next week or next month.
STOP just being an employee.
STOP listening to the noise.

We can get through this thing all right, as George Bailey told the investors of BBB&L. We've, we've got to stick together, though, have faith in each other, and stay focused on a vision and a plan for 2012.

Posted by greenskeptic at 11:57 PM