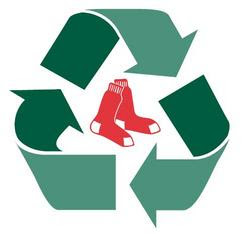 This just in from the Sports Desk of The Green Skeptic (aka boston.com): The Boston Red Sox will sport a special green logo on the left sleeves of their uniforms to mark Earth Day when they play the Los Angeles Angels of Anaheim at Fenway Park on Tuesday.

(The green logo shown at right will be worn only for this game, a Red Sox spokesman said.)

The award recognizes the Sox for environmental initiatives at Fenway, which include the installation of solar powered trash compactors around the park and the installation of solar panels that will soon help heat water at the park, the club said. (The latter is part of $600,000 initiative to increase the city's solar energy output 50-fold by 2015, according to an earlier article in the Globe.)

In September, the Sox, in partnership with the Natural Resources Defense Council, announced a five-year plan to bring green practices to Fenway Park; the plan is scheduled to culminate in 2012 in time for Fenway's 100th anniversary celebration.
(By Chris Reidy, Boston Globe staff)
Posted by The Green Skeptic at 4:38 AM