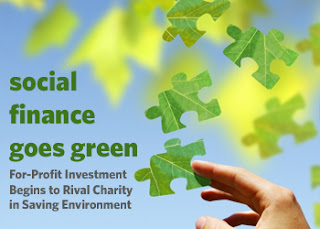 "It certainly was not for the money," writes Susan Raymond of the philanthropic consulting firm Changing Our World (see onPhilanthropy), since 100% of former Vice President Al Gore's salary will be donated to the Alliance for Climate Protection.

"Rather, Mr. Gore's new affiliation with Kleiner Perkins Caufield & Byers, announced on November 12, reflects the evolution, and even maturation, of the environment as a matter of for-profit markets rather than as a matter of nonprofit endeavor."

Readers of this blog know I have been skeptical about the ability of the philanthropic capital market to address the growing and pervasive environmental problems we face. Ms. Raymond, whose opinions I have quoted before, adds some numbers to the argument:

1.) On the nonprofit side and in the U.S., an estimated $6 billion flows to environmental causes. This represents more than a tripling of funding in the last 20 years. Still, that $6 billion represents just 2% of all philanthropic giving. An examination of the grant making of private foundations finds a similar pattern.

Now to the other side,

1.) The total value of the global environmental technologies market is $600 billion, 100 times the size of environmental philanthropy.

2.) Environmental technology and services companies represent over 1.4 million jobs in the U.S. in 115,000 private companies. And those markets are growing as the drive for environmental protection spurs innovation and new technologies.

But "technology is increasingly the least of the market," writes Raymond. "Pollution, water rights, and even biodiversity are themselves becoming financial markets....the market for SO2 allowances is valued at $4 billion, with swaps, puts and calls, and emissions allowances are used as collateral, being loaned or swapped for other pollutants. And pollution? In the U.S. SO2 emissions are on track to fall to half their 1980 levels by 2010."

Raymond goes on to note that "some financial observers expect the environmental commodities market to have a valuation of $1 trillion by the end of 2012."

Payments for ecosystem benefits is also making progress, albeit slowly. Raymond cites a Costa Rican example, wherein "forest owners are paid for the environmental services provided by their bio-assets, carbon, biodiversity, watershed management, and natural beauty. In the decade 1996 to 2005, the program preserved the forests and increased household income by 15%."

And, as I've reported previously, some big name players, such as David Brand, founder of New Forests Pty Limited, and Priceline.com co-founder Jessie Fink, are getting into the game.

This is not to say that the non-profit approach to environmental change is dead in the water. But I think it's important to take notice of the emerging market being created from the intersection of financial innovation and environmental private action.

If it all leads to an accelerated response to global environmental issues -- water, climate change, or biodiversity loss -- then perhaps the market herd will move to greener pastures.
Posted by The Green Skeptic at 8:36 AM

Thanks for another great blog. This is very much the same idea i was talking about in my latest blog over at

The idea is that the battle between big business on the one hand and the environment on the other is both false and detrimental to both sides of the debate.