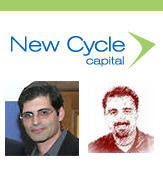 Readers of this blog know I am interested in innovative approaches to making social change while making money.

One of my best readers pointed me to a Venture Beat story about a new venture capital firm designed to maximize profits and social benefits. The guys behind New Cycle Capital want to prove that companies that are doing good can make money too. Very cool.

Two Silicon Valley venture capitalists are creating a new venture capital fund that aims to produce competitive profits and also “social benefits.” The fund, to be kicked off next year with at least $50 million, will focus on the “green economy,” as well as financial and other services that help low-income groups.

Called New Cycle Capital, the firm is led by Josh Becker (pictured left) and Benjamin Black (pictured right), both investors who have worked for mainstream venture capital firms. Becker spent time at Redpoint Ventures, while Black worked at Maveron and Rosewood Capital, and was VP of corporate development at Harris Interactive.

Becker has long been socially active in the community, serving on the board of the Full Circle Fund, a San Francisco group of executives that fosters relationships between businesses and non-profits.

Early this year, the two began to raise the fund, after they realized it’s wrong to assume that investments in companies that provide tangible social benefit don’t make as much money as other investments, Becker said. They want to focus on early-stage companies, producing stellar returns in areas such as the ecosystem of services around clean-technology.

Read the full story: Venture Beat
Posted by The Green Skeptic at 11:16 PM