Back in 2011, disruption was very much on my mind -- personally, professionally, and economically. Reading that post now -- in the wake of the current social unrest and new revelations about the banking system -- I wonder if plummeting down the same cliff. The questions I ask in this post still seem relevant and worth asking. The answers, alas, are still a way off. The disruption, I suspect, has already begun. Here is my post from October 2011 on "The Coming Disruption": 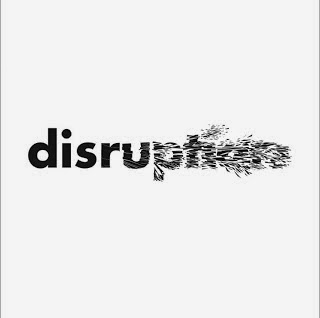 I feel like our economy -- our very way of life -- is in a simultaneous state of suspended animation and free fall.  Like a cartoon character that has run off a cliff and hasn't yet realized there is no ground beneath it.

As I said in my talk at SXSW ECO a couple of weeks ago, I don't know whether we're going to go all the way down or we're going to catch ourselves and scramble back up top.

It seems clear we're headed for a major disruption. The question is, will we instigate that disruption or will we let it happen to us?

The Occupy Wall Street (OWS) protests are indicative of this coming disruption. In many ways, it's a welcome and refreshing sign that Americans are no longer complacent, apathetic, hedonists whose sole purpose is to consume.

My fear is that OWS gets co-opted and becomes a kind of anti-Tea Party movement for the left. I fear that when I see folks like MoveOn.org, the unions, and extreme environmentalists jumping on board and trying to grab the reins.

Partisan ideology on both sides is getting in the way of facing the systemic problems of our way of life.

Our country is failing because we reward people who fail, cheat, and game the system. We bail out institutions that fail to add value to the world. And we let others create the world they want for us.

It's a perfect storm of deeply entrenched special interests, leadership incompetence, and redistribution of wealth. (Yes, that's right, I'm against redistributing wealth -- to either the one percent or the 99 percent. Wealth needs to be earned the old-fashioned way: by creating value and hard work.)

Some are calling for stronger regulation, which would inhibit financial institutions being innovative. Meanwhile, banks sit on their money and make big payouts to incompetent managers who are asked to leave and start charging fees for purchases made with debit cards to squeeze more revenue from customers.

How is that going to grow our economy?

Unfortunately, innovation in financial services is getting a bad name. The innovations of the past decade or so -- much of what got us in the mess we're in -- were driven by regulatory or credit ratings arbitrage, and were increasingly complex, opaque, and focused on quarterly results or success for those who could manipulate the game.

Now it's time for financial innovation that is conducive to sustaining economies – to value creation rather than value destruction, and that drives a new kind of prosperity.

I've been thinking about financial services as an engine of change because we're not going to make real and lasting change – or build a new economy – if money can’t be made while doing it. Altruism is great, but it won't trump greed.

So what if financial services firms clearly demonstrated their community, social and environmental impacts?

What if banks told their customers what they did with their money?

What if customers were rewarded for making sustainable choices?

What if there was a greater connection between money and values, and management was compensated for maintaining or growing that connection?

What if profit and purpose were more equitably connected?

What if sustainability wasn't an add-on, but was part of the DNA of our enterprises?

What if, instead of a triple bottom line, we talked about a single, redefined bottom line that encompasses all three: profitability, environmental health, and social well-being?

Is it even possible for us to make this shift without regulation or with better regulation or, better yet, with self-regulation?

Whatever the answer to the above questions, it's clear a disruption is coming.  We need to decide whether we will lead it or lose it.

Posted by greenskeptic at 9:28 AM