Industry Reps at MIT Energy Conference: Give Us a Price on Carbon 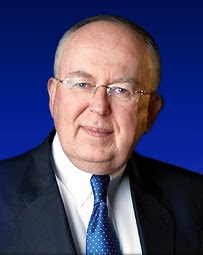 The message from industry leaders attending the MIT Energy Conference this weekend is clear: "Give us a clear price on carbon."

John Rowe, CEO of Exelon, has long been a proponent of cap-and-trade.

He reiterated this support this morning in his opening keynote, saying he felt "a bit like Elizabeth Taylor's eighth husband: I know the drill, but I'm not sure how to make it interesting."

Rowe is not so enthusiastic about our ability to reduce emissions through increasing deployment of renewables, at least not at current prices and efficiencies.

"Our work shows you can do some things with renewable energy standards," Rowe told the audience. "But you don't want to bet the farm on your picks."

Rowe secretly prefers a carbon tax, telling the audience, "Every six months I call Rohm Emmanuel and ask him if it's time yet to try a carbon tax." But he knows that it just won't happen.

Still, Rowe asserts, "We need lower carbon energy. We need more secure energy. And we need to harness the market to get it, but a market that is constrained and directed."

These sentiments were echoed by just about every industry representative I've seen at the conference.

"We need a level playing field," Helene Regnell of Maersk Line, the largest container shipper in the world, told the audience gathered for a panel on "Supply Chain Energy Use. "We need standardized, strong international regulation on carbon in order to get where we need to go and how we get there."

Speaking on the same panel, PepsiCo International's David Walker concurred, adding that 80 percent of his company's carbon footprint comes from outside the company itself.

It is hard to operate internationally with cumbersome, often conflicting regulations that differ from country to country.

The answer, at least from industry's perspective, is a clear price on carbon.

Posted by greenskeptic at 1:18 PM