The Cantwell-Collins "cap-and-rebate" climate bill, known as the Carbon Limits and Energy for America's Renewal Act (CLEAR), proposes refunding 75 percent of all revenue collected back to U.S. residents in a monthly check of about $100 per family of four.

Tim Hurst over at Ecopolitology has a good analysis of the bill proposed by Senators Maria Cantwell (D-Wash.) and Susan Collins (R-Maine), which they claim would reduce greenhouse gas emissions of 20 percent by 2020 and 83 percent by 2050. And without the messy offset program that would be hard to monitor and regulate.

As Peter Barnes wrote in On the Commons, Cantwell-Collins provides "a simple, transparent cap-and-dividend system that returns higher carbon prices directly to consumers and allows only minimal carbon trading. It would cap fossil fuel suppliers like Exxon-Mobil and Peabody Coal, rather than emitters like utilities and steel plants, because it's much easier to catch carbon when it enters our economy than when it leaves."

Barnes explains "it would auction all carbon permits and avoid giveaways, market distortions and offsets. And it would put a 'collar' on the price of carbon permits in order to limit market volatility." 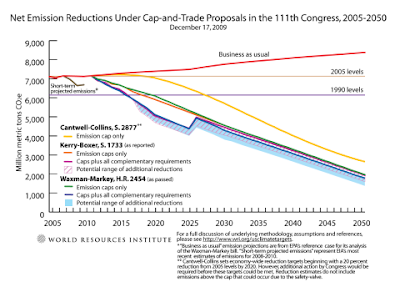 Critics of the bill, however, argue that it will be slower to deliver on reducing emissions (see chart) and will leave little revenue left for investments in clean technologies.

This Bill has garnered some interesting support, such as Dr. Kenneth P. Green at the American Enterprise Institute, which may give it a leg-up over the Kerry-Lieberman-Graham Climate Bill. But, as Tim Hurst rightly points out, "getting any climate legislation passed before November, 2010 is going to be problematic, to say the least."

Posted by greenskeptic at 12:27 PM