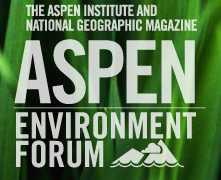 Those of you who follow me on Twitter know that I've been at the 2nd Aspen Environment Forum (AEF) this week. Like the Aspen Institute's Ideas Festival, the AEF is an unusual confluence of individuals from a variety of sectors gathered together for, well, conversation.

I like this conference because of its mix of business people, NGO wonks, scientists, writers and artists, a smattering of government types, investors, and residents of Aspen. There are always intriguing synergies that develop when you pull together such a mix, and there are too few conferences that do it so well.

This year's dialogue is focused on energy and, ostensibly we're here to consider the world's needs, the alternative solutions, and the related environmental impacts or benefits.

But as much as I enjoy this conference, I'm also a little frustrated by it.

Throughout the conference, two things have struck me as problematic and perhaps in need of being addressed next year: a noted absence of conflict and a disconnect between some of the advertised topics and the sessions as conducted.

On the first point, I think conflict is essential to generate new ideas and creaitvity. It's been far too congenial here. There were notable exceptions, including a little skirmish between Patrick Moore and James Woolsey over the merits of solar vs. nuclear; and what I understand was an entertaining debate by Randy Udall and Jim Rogers of Duke Energy. (See Karl Burkart's coverage of the latter exchange.)

At least in the sessions I've attended, there has been a little false advertising. One example is yesterday's session on "Environment and Energy: Perspectives from Emerging Economies," which featured some very powerful women, including Queen Noor al Hussein and Alicia Antonio de Abreu from Mozambique.

While I agree that energy and environment issues affect women disproportionately and in often adverse ways, the discussion quickly shifted from the advertised topic to a dialogue on gender equity. Now, don't get me wrong, that's a good topic for discussion, but not what most of us in the room came to participate in.

Even more frustrating was the session on "Environment and New Media." Of the panelists, only Joel Makower (founder of Greener World Media and its related online publications, one of which I have written for in the past) could really be considered part of the "New Media." The others, including Douglas Fischer of The Daily Climate and Margie Kriz of National Journal, were decidedly "old media" and proud of it.

The panelists spent much of the time wringing their hands about the decline of newspapers and other print media. They also trashed bloggers as opinionated yahoos who don't practice journalism and are forcing the old media stalwarts to adapt to changing customer habits and needs, which might lead them to give up journalism and become news aggregators.

In other words, it felt like a wake for old media rather than a substantive discussion about the merits or drawbacks of new media. (To be fair, Chip Giller of Grist.org was originally scheduled to be on this panel, but weather kept him away. He may have added a different tone to the dialogue.)

And it was solely focused on news/journalism and delivery. Where was the dialogue on mobile apps, social networks, and other new media? A missed opportunity.

Engaging the speakers and moderators in developing the overall theme and designing individual sessions may help in future conferences.

Among the highlights of this year's conference: Dr. Jane Lubchenco's conversation with the Washington Post's Juliet Eilperin. We are very lucky to have Dr. Lubchenco at the helm of NOAA; she is a brilliant scientist with a unique ability among brilliant scientists to communicate effectively to a general audience.

There was also better international representation this year, with people from several African countries, Latin America, the Indian sub-continent, the Middle East, and China.

I'm hopeful that today's program, which includes dialogues on conservation, energy efficiency, the Arctic, and China, will be focused and stimulating.

Posted by greenskeptic at 7:29 AM