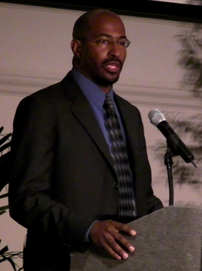 Image via WikipediaVan Jones, as readers of The Green Skeptic know, has done some remarkable things at the Ella Baker Center for Human Rights and now is trying to focus attention on one of the critical needs of our economy: jobs.

Specifically, Green Jobs. Van's premise is that Americans can be put to work in the New Green Economy; that, in fact, it can help lift people out of poverty.

And there may be something to his assertion. While the manufacturing of materials and products associated with alternative energy or energy efficiency can be done overseas, the installation and servicing of those products needs to be done on site.

Now Van and his cohorts have conceived of a National Day of Action calling for Green Jobs Now. Tomorrow, Saturday, September 27, they are asking people to step up and say, "I'm ready for the green economy."

The objective is to foster a green economy strong enough to lift people out of poverty.

Here are Van's own words, from the Green Jobs Now blog:

George W. Bush's house of credit cards is falling down - on the heads of the American people. We need dramatic action - but not just to bail out financial titans who destroyed the economy.

We need to throw a green life-line to the people who want to rebuild it.

There is only one comprehensive solution to the present mess: put America back to work retrofitting and repowering America with millions of green-collar jobs.

A new study from the Center for American Progress and PERI shows that it can be done.

Saturday, tens of thousands of people in all 50 states will be rallying, demanding real solutions for our communities. We are calling the events: "Green Jobs Now! A day to the build the new economy."

This massive green jobs day of action is being co-produced by Green for All, 1Sky and Al Gore's WE campaign - with more than 100 partner organizations. It is the first of its kind in the history of the country, and it will include people from all walks of life (including low-income people and people of color).

As of today, we have more than 600 events planned. You can pull up event details (and see a cool animated VIDEO) on www.greenjobsnow.com.

Now is the time for the USA to pivot away from an economy based on borrowing and toward one based on building. We need to rely less on credit from abroad and more on creativity here at home.

And here is more detailed info:

Green Jobs Now, a national day of action this Saturday, September 27 to advance a socially just and inclusive green economy.

In collaboration with Green for All, 1Sky, and Al Gore's We Campaign, and many more organizations, we have organized nearly 600 Green Jobs Now events in all 50 states! Together we are building a movement to lift millions of people out of poverty and solve the climate crisis.

Our actions will send the message that people of all classes and colors are ready for a new economy - one that uplifts people and honors the planet. These events will call for building green pathways out of poverty and into prosperity for millions of people. From coast to coast, tens of thousands of people will tell the world: "Were ready for the green economy."

Goals for the National Day of Action:

2. Build a powerful and diverse base of organizers, promoting the movement for green jobs as the best way to fight poverty and global warming.

3. Elevate the voices of low-income people, people of color and other vulnerable constituencies in the movement for green jobs.

For more information and to find an event near you, visit: www.GreenJobsNow.com .

Posted by greenskeptic at 8:45 AM