Hank, Tell George to Pass This Sucker and Let's Get On with the New Green Economy 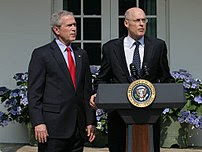 Image via WikipediaH.R. 6899, the 290-page energy bill that passed the House on Monday night will come up before the Senate next. Let's hope it doesn't fall prey to partisan politics.

Rather, this could be an opportunity for President Bush and the Sedate, er Senate, to put aside partisan politics. Sure, I know Democratic Speaker of the House Nancy Pelosi has called the Bill a "bold step forward that will help end our dependence on foreign oil," and that makes some in the GOP grit their teeth.

But let them also bite their tongues and see this Bill for what it can really be in these turbulent times: part of a real plan to stimulate our economy and jump-start the new green economy.

There's something for every one in this monster, whether your mantra is "drill baby drill" or "Here Comes the Sun," you have reason to support this as a step in the right direction.

It lets states decide on what reasonable are limits for drilling, stimulates renewable investments, and closes long-gaping fossil-fuel tax loopholes.

To advance the national security interests of the United States by reducing its dependency on oil through renewable and clean, alternative fuel technologies while building a bridge to the future through expanded access to Federal oil and natural gas resources, revising the relationship between the oil and gas industry and the consumers who own those resources and deserve a fair return from the development of publicly owned oil and gas, ending tax subsidies for large oil and gas companies, and facilitating energy efficiencies in the building, housing, and transportation sectors, and for other purposes.

I'm hoping my former Chairman (from TNC) Hammerin' Hank Paulson will knock some sense into Prexy George and change his mind on vetoing what's been labeled the "Comprehensive American Energy Security and Consumer Protection Act."

It's time for sound and secure energy policy, economic stimulus rather than bailouts and styptic pencils. Time to jump-start the new green economy and give us a break from the market madness.

Posted by greenskeptic at 5:05 AM