Earth: The Sequel by Fred Krup and Miriam Horn: A Review 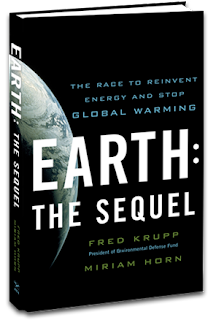 Entrepreneurs can save the planet, but they need a cap-and-trade system to do it.

That's the premise of Earth: The Sequel, by Fred Krup and Miriam Horn, and published in March by W.W. Norton.

The authors, the head of Environmental Defense and a journalist now working for the same, respectively, argue passionately on behalf of emissions cap-and-trade as the solution to unleashing the entrepreneurial spirit of Americans (and others) to solve the climate crisis.

They also tell the story of some of "cutting-edge" innovators in the clean energy space, people like Conrad Burke of Innovalight, the solar nanotechnology company, Isaac Berzin, the chemical engineer who co-founded algae-farm biofuel developer GreenFuel Technologies, and the colorful Bernie Karl of Chena Hot Springs, who is trying to capitalize on geothermal energy found below the Alaska bush with the help of Fortune 500 company United Technologies Corporation.

The stories are simply told, some of them compelling, some bordering on boosterism, but the focus on entrepreneurs is welcome. There's nary a whiff of skepticism in these pages, however, which read like a virtual catalog of potential clean tech investments.

I realize the authors don't want to back one technology solution over another -- and the new green economy requires not just one silver bullet but a full chamber -- but a little more critical analysis of the full panoply would have been nice (see Pernick and Wilder's The Clean Revolution for more in-depth analysis of the sector).

Private investment is fine, the authors reason, whether entreprenuer or venture capitalist; however, it can't scale without a cap on carbon emissions. In their view, a cap is the only thing that will make alternative energy more affordable to generate. Without it, we will neither reduce emissions enough nor grow the burgeoning clean tech industry.

"To save the planet from calamity," write Krup and Horn, "innovation and deployment of known technologies must occur now at a pace as intense and a scope as vast as the settlement of the western frontier."

Scientists have determined we need to reduce CO2 emissions by 80 percent by midcentury to "stabilize the global climate." According to the authors, "we must produce at least 14 trillion watts of carbon-free energy by 2050 -- about as much power as we now get from the entire fossil energy business" to reach that goal.

The advantage of a cap is that it puts a true limit on total emissions; the problem is it can lead to higher prices for consumers and windfalls for certain companies.

Companies need the stability and predictability of a cap. As Dupont CEO Chad Holliday, whose company is part of a coalition calling for a national cap, says in a quote from the book, "You need some certainty on the incentives side and on the market side, because we are talking about multiyear investments, billions of dollars that will take a long time to pay off."

A national cap would provide that certainty. We just need to make sure it covers all the carbon economy and that the permits are sold not given away free, as in the current European Union scheme. There is even talk of a cap-and-dividend style program that would make equal payments to all Americans (along the lines of the Alaska Permanent Fund Dividend).

"We have before us an extraordinary opportunity," Krup and Horn conclude. "to harness the power of the United States of America's huge and dynamic markets to ensure a safe future...Enacting a cap on carbon will gather U.S. ingenuity and resourcefulness to serve a higher purpose: protecting this planet for generations to come. We have the talent and a brief window of time to create the world of possibilities. All we need is the resolve."

Higher purpose or base greed, I don't care; let's just get moving on the new green economy.

In the end, as NYC Mayor Michael Bloomberg offers in his advance praise blurb, "Earth: The Sequel makes it crystal clear that we can build a low-carbon economy while unleashing American entrepreneurs to save the planet, putting optimism back into the environmental story."
Posted by The Green Skeptic at 6:30 PM