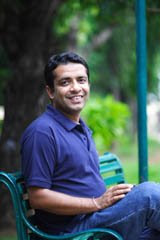 "What are the three basic human needs?" asks Anshu Gupta, an Ashoka Fellow and founder of Goonj. "Food, clothing, and shelter. Everyone talks about hunger and homelessness, but we don't talk about the second basic need."

Indeed, argues Gupta, the only time people think about clothing for the poor is after a natural disaster or when some charity has a clothing drive.

And what happens to those clothes? Typically, if they are not shipped right away, they are stockpiled for future disasters. Many times without quality control: resulting in torn or soiled clothing or single shoes from a pair being distributed. The usefulness is questionable.

Gupta wanted to change all that.

"Clothing is a symbol of dignity," he says, without a trace of sentimentality. "We're not promoting charity; we are adding value and professionalizing the collection of discarded materials."

Through Goonj, which means "echo," Gupta started a "clothes for work" initiative, designed to help poor people earn their clothes in exchange for work cleaning up and taking care of their villages. "This takes the charity out of it," Gupta shares. "They earn their clothes and help improve their surroundings at the same time."

Goonj is run like a business, a social business, and one gets the impression Anshu Gupta could easily be running a large manufacturing or distribution center in the private sector if he wasn't possessed by an idea that clothes are a basic human need that all need access to.

The journey starts at one of over 30 collection centers in India's major cities, where volunteers and employees of Goonj sort and process the materials and package it in jute bags, which are all coded according to contents and entered into their database.

It's a sophisticated process. One of the centers, in a series of warehouse-like buildings in a modest neighborhood in New Delhi, was a hub of activity on the day we visited. Women were sorting the incoming clothing according to whether it's a male or female garment, color, size, and condition. Other women were sewing articles of clothing in need of repair; if it's beyond repair, it will be used for something else.

"They are putting together school uniforms," Gupta says. "Of course they may be slightly mismatched, but the schools where this is going otherwise wouldn't have a uniform, the kids may not even have clothes to wear to school."

Goonj is having an impact on dignity, but also on health.

Gupta cites villages in Rajasthan, which is one of the areas on their distribution network. Rajasthan is mostly desert, and most people don't think of desert people needing warm clothes or blankets.

But temperatures drop precipitously at night and if you barely have clothes to cover your body, it can be a night of agony. Goonj is making sure that blankets and clothing get to those who need it.

Clothes are only an entry point for Anshu Gupta and Goonj. And one of their newest innovations is having tremendous impact on the health of poor women.

Sanitary napkins are ubiquitous in the west; a disposable product that most people take for granted. But countless women in rural villages use dirty, useless cloth during their five days of menses, leading to infection and disease. Gupta speaks of one woman who used a piece of an old blouse and died of tetanus because she was unaware there was a sharp metal hook inside.

Through its initiative "Not Just a Piece of Cloth," Goonj has developed a cloth sanitary napkin product made from selected scraps of cloth from the sorting process (25 percent of the cloth they receive is unusable as a garment, but can serve other purposes).

They provide clean cloth napkins to rural women and women living in slums and campaign in rural and urban India to generate awareness of the need for cleanliness in the monthly cycle.

Awareness-building is a big part of what Goonj does, especially where waste is concerned. And as India's economy accelerates so does consumerism and increased wastage. Goonj is concerned that the next generation of Indians understand the connection between consumerism, waste, and poverty.

So they have developed a program called School-to-School (S2S), Winner of an Ashoka's Changemakers Innovation Award, to turn the wastage of urban school children into a resource for thousands of rural and slum schools. It also serves the dual purpose of sensitizing urban students and their parents about the needs of the less fortunate.

"The urban kid has a fight with his parents between a Pokémon bag and a Spiderman bag," Gupta says. "They have no idea what it's like to fight for a bed."

Goonj's target is to support 30,000 children initially by channeling material like used books, uniforms, shoes, school bags, and even furniture to the rural and slum schools.

And each year, Goonj hosts an event called "Pratibimb," bringing together urban and rural school children and teachers from across the country who would otherwise never know each other.

Goonj sends out over 20,000 kgs of material every month in 19 Indian states. Their small staff is augmented by over 300 volunteers and a distributions network of over 100 grassroots organizations, Ashoka Fellows, social activists, and even units of Indian army in rural India.

Recycling is not a new phenomenon, even in India. Indeed, Anshu Gupta says that almost everything in India gets recycled, with the exception of food waste and some plastics. The true innovation here is in the distribution of the materials.

Goonj has figured out an elegant solution to ensure that materials get to those who need them all year-round, rather than waiting for disaster to strike.

In the end, Anshu Gupta and Goonj are proving the old adage that "one person's rags can indeed be someone else's riches."

Postscript: At the India NGO Awards tonight, in New Delhi, Goonj was awarded the India NGO of the Year Award for 2007, sponsored by the Resource Alliance and the Nand and Jeet Khemka Foundation. It is another in a string of recognitions that this organization has garnered.

(Disclosure: The author is a vice president of Ashoka, which selected Anshu Gupta as an Ashoka Fellow in 2004, preceding the author's employment.)
Posted by The Green Skeptic at 11:40 PM

I was one of those kids that fought over that metaphoric spider man bag.

That's the problem with the world, and it's spreading. Luckily, it's also a cannibalistic and a self-destructive quality.

I'll admit, I'm a wannabe philanthropist, haven't really done much and still need to learn a bunch before I could even begin....but I have a small idea to negligibly improve the "next generation" of people. I just added you to the list of people I'm going to send the concept to when I'm ready to launch. :)