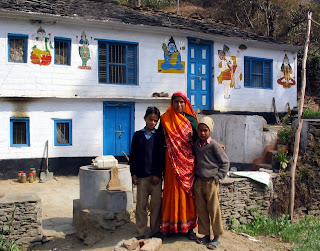 I spent last weekend with Ashoka Fellow Kalyan Paul and his group Grassroots in Ranikhet, Uttarakhand, one of the northernmost states in India, bordering Nepal and China.

Kalyan and Anita Paul moved to the "hill country" -- Ranikhet is 1829 meters above sea level -- in 1987. Originally from Calcutta, Kalyan met his future wife and partner in social change, Anita, while both studied for a Masters in Social Work at Delhi University.

After facing numerous challenges and frustrations in urban settings and with more traditional development approaches, the Pauls decided to work with mountain communities. "Kalyan always wanted to live and work with hill folks," according to a source familiar with the situation. "Anita, a Himachali who grew up in the plains, egged him on."

Less than 20,000 people live in the area in and around Ranikhet, a high percentage of whom live in small hamlets and rely on natural resources for their livelihoods and sustenance.

"We got a grant from the Ford Foundation to literally just 'walk around,' and that's what we did," Kalyan says. "At first the local people were skeptical; they'd check us out and see what we were doing. When they saw us walking around like them -- and we walked all over, man -- they decided, 'He's probably okay.'"

That walking around gave the Pauls a clear sense of the integrated nature of the issues facing mountain people.

"They live totally off of what nature provides," says Kalyan. "If there's no water, they can't grow their food. If there are no trees, there is no water. It affects everything in their lives and some leave the mountains for more urban areas. That kind of life can be hard, man."

Enter Grassroots, which the Pauls founded in this area 16 years ago. They started by looking for the root causes of the mountain peoples' poverty: their lives and livelihoods are tied to the land and its natural resources.

Those resources have been dwindling as a result of changes to the landscape that started under British rule and continue in the Indian forestry bureau today. Basically, the foresters promoted non-native pine plantations and eucalyptus over native broadleaf deciduous trees.

Sounds like a simple thing, but it had two major impacts: the pines didn't help recharge the water sources, especially after harvesting, and the dead leaf litter was gone, which the farmers spread on their fields. Leaf litter is a natural top-soil maker. In contrast, the more acidic pine needles form a thick mat on the forest floor, preventing rainwater from seeping into the soils.

You can figure out what happened next. The water table, that feeds the springs that nourishes the crops that feed the people, kept dropping. Today, at winter's end, there is very little water in the aquifer and the springs are extremely low.

The Pauls, and the people who work with them, are addressing it by promoting native plant nurseries, replanting saplings from those nurseries, and developing rain water catchments to help regenerate the water supply.

That would be fine as a standard environment project, but Kalyan hasn't stopped there.

Grassroots determined that another factor in the forest decline was the villagers' own needs for firewood used for cooking in their homes. This use was not only denuding the forests, but was having health impacts as well: women cook with open wood fires in their homes (breathing in the smoke all day) and they have to walk farther and farther each day to find firewood, which they carry on their heads.

So, Grassroots introduced biogas stoves to their homes. The villagers now burn the methane generated by animal waste (cow and goat dung -- one thing of which they have plenty!) instead of firewood, and they use the slurry on their fields as an excellent fertilizer. 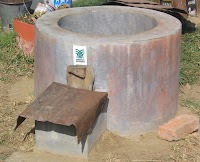 They also formed an artisan's guild to train local villagers as masons to build these stoves, thereby accomplishing three things in one: reducing forest cutting, improving the health of women, and providing jobs for at least 30 men in the area; at least 50 men have been trained as masons.

The Kumaon Artisans Guild promotes and builds appropriate technologies for rural development, including the biogas wells, twin pit outhouses, and infiltration wells for drinking water. (The infiltration well technology, developed by Dr. Tim Rees, is worth another post of its own.) 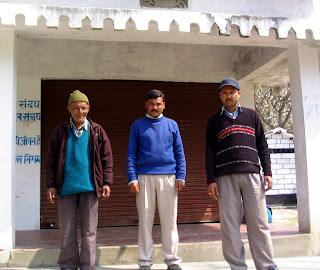 Members of the Guild, who are known as "Barefoot Engineers," told me they are now installing 300 biogas units annually, 60 water pumps a year, and 400 toilets.

In addition, Grassroots has organized a women's cooperative, called Umang, which means "inner strength" or "self-confidence." Umang now comprises a network of 2000 women spread over hundreds of villages and governed by reps from participating women’s "self-help" groups, with day-to-day functions managed by a group of women from the surrounding area.

Umang’s work includes savings and credit, but also enterprise development. They produce knitwear worth more than Rs.1.5 million each year, about a third of which accrues to the women as wages, according to sources familiar with the situation.

In addition, the Umang women engage in food processing, producing about 10 tons of product annually, especially pickled condiments made from local produce such as chilies, ginger, and garlic, along with fruit preserves and jams. (Their plum chutney is fantastic!) Umang also has an apiculture program that produces about 3 tons of honey every year.

To better understand the impact watershed-wide, Grassroots, together with UNESCO, is conducting a study of the hydrology of the Gagas River Basin, which covers 500 square kilometers and includes 360 villages.

Faisal K. Zaidi, a Post Doctoral Researcher in Hydrogeology who works with UNESCO in New Delhi, on the study says that the Gargas has been included in UNESCO's Hydrology for Environment, Life, and Policy (HELP) program. HELP, according to its website, "is creating a new approach to integrated catchment management through the creation of a framework for water law and policy experts, water resource managers and water scientists to work together on water-related problems."

Zaidi says that by the end of the monsoon season this year, likely around September, they should have the first water budget for the Gagas River Basin, based upon the data collected from this study. To date, they have set up rainfall and stream flow monitoring stations in almost 20 locations, and at least a half-dozen weather monitoring stations in the basin. 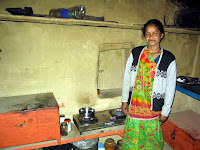 The true innovation in Kalyan Paul's work is the holistic approach to the root problems. I have seen plenty of economic development and environmental projects that are limited in their scope. Most projects, indeed most organizations attack one problem, and not always the root of a problem. It's often an either/or dilemma: either economic development or conservation; either livelihood or watershed protection. The Grassroots approach is integrated, holistic and more effective as a result.

Not bad for a guy who started out "walking around" 20 years ago.


(Disclosure: The author is a vice president of Ashoka, which selected Kalyan Paul as an Ashoka Fellow in 1992, preceding the author's employment.)
Posted by The Green Skeptic at 1:22 AM

You have covered so much in so little time. Wonderful.Sid (Siddharth)

"Barefoot" Engineer, that kind of makes me think a little, you know?

I have lots to learn about the other side of the world.

Just came upon this. I know about the work you've done, and this article reinforces my beliefs. Keep on truckin'.