Climate Change: How Does Your Garden Grow? 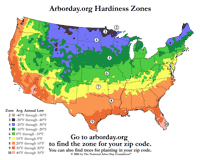 The past few weeks have been unseasonably warm here in the Philadelphia area. As I write this, it is 68 degrees F. And this is, what, 6 January?! People are walking around in shirtsleeves, t-shirts, even shorts -- in January. And almost everyone you pass is compelled to make a comment. "What would Al Gore say about this?" a neighbor said to me today. And just the other day, as I stepped up onto my front porch, what did I see buzzing around before me? A mosquito!

Around the neighborhood daffodils and even some crocuses are starting to poke up through the ground. This on a day when seed catalogs have started to arrive in the mail. Then this morning's Weekend Journal showed up with an article by Bart Ziegler titled, "Climate-Change Gardening."

Ziegler notes that the National Arbor Day Foundation recently published a new hardiness map, which indicates that the traditional zones outlined by the USDA have shifted north. The hardiness zones denote areas where certain plants can survive winter environments.

Philadelphia, where I live, has long been one of the southernmost extensions of Zone 6, is now completely in Zone 7. One horticultural dealer told Ziegler that "some gardeners in the Philadelphia area have been growing camellias, a flowering bush formerly confined to the South." Camellias? What's next? My son asked if we could grow bananas.

Not yet, but we may be looking at the seed catalogs in a whole new light this winter. That is, if winter ever comes.

See an animation of how the changes affect your area: Arbor Day Map Changes

Very much enjoyed my stroll through your blog...as a poet and an avid reader, I found it both an enlightening and enriching stay. I thank you...

HAHAHAHAHA, did winter come for you this year? I bet it did.

Yes. We got slammed this year...