Microfinance: At a crossroads, according to Wharton finance panel 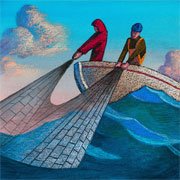 With the awarding of the Nobel Peace Prize to Muhammad Yunus last week, the world is focusing more attention on the world of microfinance. Now, according to panelists at this year's Wharton Finance Conference, held earlier this month, the business of making loans to poor people in underdeveloped countries is itself entering a critical phase.

"On one hand," according to an article in this week's Knowledge@Wharton, "foundations and other non-governmental groups have shown the private sector that there is money to be made in lending to some of the globe's poorest populations. And, they acknowledge, only the private sector has the capital to do this at the necessary scale. But they also warned, at the panel and in interviews afterward, that the drive for profit could leave behind some of the neediest citizens -- particularly those in remote rural areas -- and thus defeat the enterprise."

"The finance conference, Creating Value in a Global Economy, focused on the state of what moderator Keith Weigelt, Wharton management professor, jokingly called, 'the good side of capitalism.'"

Categories: changemakers, microfinance, microcredit, social entrepreneurs
Posted by The Green Skeptic at 7:05 AM