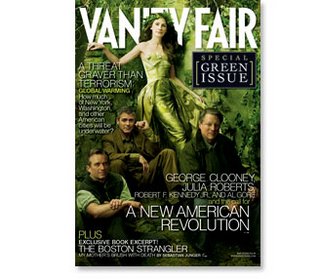 Vanity Fair's first "Green Issue" is chock-full of celebrities associated -- some only tangentially -- with environmental issues, as well as a good overview of the climate crisis by Mark Hertsgaard. Then there is Al Gore, the current Godfather of the Climate Change movement.

In his essay, "The Moment of Truth," the former vice president and champion of climate crisis action makes a common mistake echoed by business consultants, environmentalists, and others when he writes, "The Chinese expression for 'crisis' consists of two characters....The first is a symbol for 'danger'; the second is a symbol for 'opportunity'."

I first wrote about this misperception in a posting on this blog back in January: "Crisis or Opportunity, China Looms Large". In that posting, I referred readers to Victor Mair, professor of Chinese literature at the University of Pennsylvania, who debunks this usage on his web site devoted "to the writing Mandarin Chinese in Romanization."

Mr Gore does his cause a disservice by repeating what Professor Mair calls a "grossly inaccurate formulation." He should strike this phrase from his otherwise eloquent and hopeful remarks about the climate crisis.

And, okay, I'll confess that although I'm happy Vanity Fair is covering the issue and bringing it to a wider audience, I was a little miffed at not being invited to the party. Next time Graydon, gimme a nod.


Categories: climatechange, media
Posted by The Green Skeptic at 9:49 PM

Alas, there was no invitation for me, either. Ah well, so it goes!

We should be used to Al's 'inaccuracies.' After all, he did invent the internet.