Roberto Clemente: A Howitzer for an Arm, An Ocean for a Heart 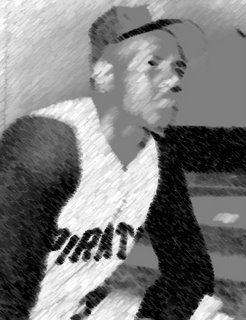 In an earlier post on John Lennon, I said that he was one of three people who taught me about caring. The other two were my Aunt Gladys and Roberto Clemente. It seems appropriate to write about him on this, the 33rd Anniversary of Clemente's tragic death, when he and four others crashed into the Atlantic Ocean while flying relief supplies to Nicaraguan earthquake victims. "Some right fielders have rifles for arms," said Tim McCarver. Clemente "had a howitzer." He also had an ocean for a heart.

Roberto Clemente was born on 18 August 1934, in Barrio San Anton in Carolina, Puerto Rico. He played baseball in the major leagues from 1955 until 1972, the year of his death, all with the Pittsburgh Pirates. The first Latino Hall of Famer, Clemente finished his career with a .317 batting average, 440 doubles, 166 triples, 240 home runs, and 1,305 RBI in 2,433 games. He hit exactly 3,000 hits, knocking a double in his very last at-bat. I have a framed photograph of this hit in my house.

I was born in Providence, Rhode Island, and grew up between there and Boston, along the Route 1 Corridor, 45 minutes from anywhere. I am a lifelong Red Sox fan, followed them religiously throughout my life, which encompassed three World Series losses before the 2004 season. So how did I become a fan of Roberto Clemente, who played his entire career in the National League on a team in a city nearly 600 miles from my hometown?

I'm not sure what it was that first attracted me to number 21. I started reading about him in the peak of his career, maybe it was the writers' adjectives. Late at night, I could pick up a Pittsburgh station on the radio and listen to his feats in the "green fields of the mind." The old television series "This Week in Baseball," showed me Clemente's "howitzer arm." He easily threw runners out as they tried to stretch a double into a triple, which was always a mistake against Roberto. Curt Gowdy on NBC brought me the All-Star Game and the 1971 World Series against Earl Weaver's Orioles. Clemente batted .414 in that World Series.

However, something else drew me to Clemente. I am part Portuguese on my mother's side, and in southern New England at the time, probably still, this came with a certain sense of insecurity. "Pork'n'cheese," my Scotch-Irish father used to joke; I had the dark olive skin, black hair and dark eyes of a "Portagee" kid. The ribbing and insults caused me to be ashamed of my Portuguese heritage for a long time. Yet the more I learned about Roberto Clemente's difficulties on and off the field dealing with prejudices against Hispanics and African Americans, the more I felt a kinship with the right fielder.

For one entire summer, I wore only a t-shirt someone (an Aunt or Uncle?) had given me from a trip to Puerto Rico. It bore one of those economic maps displaying what products came from which area, where the big hotels were, and baseball fields. I knew Clemente had played for the Santurce Crabbers, so I circled the city with a pen. My mother finally had to throw out the t-shirt I had worn it out. I stormed off to my room and wouldn't speak to her for days.

On New Year's Eve 1972, Roberto Clemente boarded a small DC-7 to deliver food, clothing and medicine to victims of a devastating earthquake in Nicaragua. Clemente, who led the Puerto Rican relief effort, and four others died when the four-engine plane, with a questionable past and an overload of cargo, crashed into the Atlantic. This was a major league baseball player, mind you, putting his life on the line to help others. He cared.

I wanted to name my second son Roberto, after my boyhood hero. His mother didn't think "Roberto Anderson" worked too well, so we went with her suggestion, Walker, after the Walkers Percy and Evans. One day, after our son Walker was born, I showed him the framed photograph of Roberto's 3,000th hit, which is mounted with two Clemente baseball cards from my childhood and a postcard of his plaque from the Hall. "I wanted to name you after this guy, one of my heroes," I told him. It was then I looked at the plaque saw that my hero's mother's maiden name was Walker. An astounding coincidence? My Walker and his twin sister were born on 18 August 2003, which would have been Roberto's 69th birthday.

Roberto Clemente Walker was 38 when he launched his ill-advised relief mission in that DC-7. No one could persuade him not to go. He cared that much.