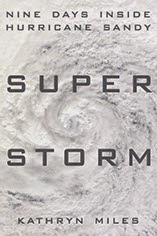 Two years ago tonight, Superstorm Sandy hit New York with a vengeance. Whatever you call her: hurricane, superstorm, Frankenstorm, Sandy was a massive, monster storm.

Sandy was the second costliest hurricane in recorded history. Only 2005’s Hurricane Katrina was costlier in terms of damages -- $68 billion and counting as of the spring of 2014 – and Sandy was responsible for at least 286 deaths in seven countries.

Sandy’s storm surge swamped New York City, flooding tunnels, subways, and streets; cutting off power to residents in and around the city.

At 49 feet above sea level in Park Slope, where we rode out Sandy, we were relatively unscathed, safely ensconced in our apartment building, tucked up on a little one-block, one-way Place, in city parlance.

Sure, we heard the howling winds and saw the rain ripping sideways like an overzealous carnival shooter trying to win the prize kewpie doll. And in the aftermath of the storm, we saw the downed trees scattered about the neighborhood, across blocks, on top of cars, or simply uprooted.

But down the hill – down the slope – in Gowanus and Red Hook, across the bay in Staten Island, and out on Rockaway, the devastation was stunning. While we had power, food, water, and even Internet access, many others had barely anything, forced from their homes or unable to return. We had shelters and help centers and volunteers. It felt far from the madness of the storm’s wrath.

As the days unfolded after Sandy hit New York and New Jersey, we began to learn about the devastation in her wake. We felt even more fortunate. The images and stories that emerged were at times horrific: an uncontrollable fire raging on Breezy Point, caused by rising sea water; a Staten Island mom who lost her twin boys in the storm surge; cars floating in the flood waters outside the Battery Tunnel; a couple crushed by a tree while walking their dog in Ditmas Park.

There were many other stories, as Kathryn Miles reveals in her new book Superstorm: Nine Days Inside Hurricane Sandy

, some familiar from the media coverage, others impossible to know unless you were living it. Miles first wrote about Sandy for Outside Magazine; her story on the wreck of the replica HMS Bounty was a powerful piece of magazine reportage.

But Miles proves, as she did with her previous book, All Standing: The Remarkable Story of the Jeanie Johnston, The Legendary Irish Famine Ship

that she excels at long-form narrative. That earlier book was about the lone ship to sail during the famine years without losing a single passenger where countless others had failed. As in that earlier book, Miles writes well not just about the sea (she lives in Maine and is an avid sailor), but she deftly brings to light the lives of the people whose stories she tells.

Miles follows the storm as it first hits the radar of the National Weather Service and then National Hurricane Center, and builds as the storm itself metastasizes, swallowing up another storm to its north, and eventually colliding with not just land, but with a nor’easter plummeting down towards the coast from the north.

The result reads like an historical potboiler as she builds the narrative of the storm out of the lives of the people tracking it, trying to avoid it, and getting trapped in it.

There are the requisite colorful characters worthy of a novel: the Hurricane Hunters, who fly a C130 into the hurricane to collect data; Lixion Avila, torn between his two loves, storms and ballet, as he attends a ballet convention in Cuba at the time Sandy starts to build; Chris Landsea, whose name must have determined his profession; and Claudine Christian and Robin Walbridge, the former a late-comer to the crew aboard the Bounty who died at sea; the latter, the captain who is presumed to have gone down with his ship.

Readers familiar with Miles’ previous book will recognize her technique, which builds and swirls much like the hurricane it depicts, time-lapsed glimpses of each character as they try to understand what this storm will do and where it will go or how to avoid and get around it. Superstorm is a page-turner, as they say, and I couldn’t put it down.

The end result is a remarkable chronicle of Sandy’s impact, not just on the land, but on so many people, on the way such storms will be reported in the future, and about the need for resilience measures for our cities and coastal areas.

Superstorm is a gripping read and, despite a few very minor editorial flaws -- she doesn’t close the loop on a couple of stories she sets up, such as the fate of the couple in Ditmas Park and their dog who waited by its fallen caretakers, for example -- should be read by all who want to understand the storms of the past to help deal with or keep out of the way of the superstorms of the future.

As Miles herself writes in her afterward (sic): “Sandy was the worst-case scenario that was never supposed to happen. New York may have fared better than Haiti, but the storm show just how vulnerable we all are…But sometimes, that’s just not enough. Sometimes, Nature breaks all the rules. And it always plays to win.”


Hopefully, that's a lesson Miles can help us learn before the next superstorm hits.

Posted by greenskeptic at 5:21 PM