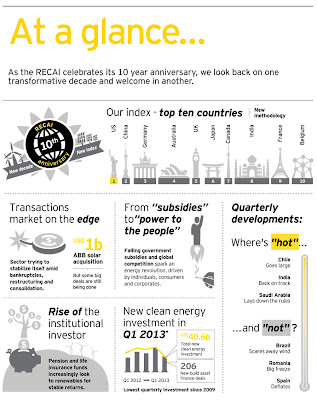 For the past ten years, Ernst & Young has published a quarterly index analyzing the attractiveness of countries around the world for developing renewable energy.

Called the Renewable Energy Country Attractiveness Index (or RECAI, for short), the index has provided a barometer of the renewable energy sector.

Established in 2003, the quarterly publication ranks 40 countries for their "attractiveness" of renewable energy investment and deployment.

Global annual clean energy investment totaled US$269b in 2012, representing a five-fold increase on 2004, according to the report. And the sector is now becoming competitive with more traditional fossil fuel energy sources.

New and improved technologies, such as cheaper, more efficient solar panels, biomass boilers, and even small wind turbines, are those technologies cited by the Index that allow energy users to generate their own power where and when they need it.

This "democratization" of energy sources provides greater flexibility when it comes to energy generation and management.

The latest RECAI includes a revised, updated methodology reflecting shifts in investment drivers and the sector's maturing since the report’s creation 10 years ago.

An increased focus on the role renewable energy plays in each country’s energy mix, energy supply and demand, and the cost competitiveness of renewable energy, are some of the changes reflected in the new methodology, according to its editors.

As with other country attractiveness indices, EY has also adopted an increased emphasis on the economic and political stability of each particular market.

"Market fundamentals, such as energy demand growth, security of energy supply and the affordability of renewable energy, feature as some of the most prominent drivers of renewable energy growth today," says RECAI's chief editor Ben Warren.

"Our revised methodology allows us to analyze each market's investment attractiveness much more effectively by considering these factors and weighting them accordingly," claims Warren, who serves as Ernst & Young UK Energy and Environmental Finance Leader and Global Cleantech Transactions Leader.

The revised index sees the US regain the top spot in terms of attractiveness, as high barriers to entry for external investors realign China into second place.

Despite that change, the RECAI finds prospects for growth for the sector in China remain strong with continued GDP growth, increasing energy demand, and the ongoing strategic importance of the sector to the local economy providing solid foundations for the future.

(Disclosure: The author is marketing director for EY's Global Cleantech Center, which is one of the sponsors of the RECAI.)

Posted by greenskeptic at 9:35 AM